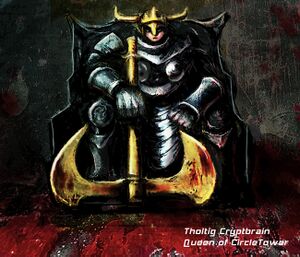 Tholtig Momuzidek Lelumdoren, or Tholtig Cryptbrain the Waning Diamonds, was the heroine of the greatest Dwarven epic to have ever come out of Legends mode: a queen, a champion, locked by fate in a genocidal war with the elves that laid waste to both their civilizations, and holder of the known record for elves (or any sentient warrior) slain by a single dwarf in any mode of the game: see here.

The History of Dwarven Ragnarok[edit]

The world in which this legend came to be was known as the Everlasting Dimensions, and its chief distinguishing feature were megabeasts modded to size 70, save in the case of hydras, which weighed in at size 140 to balance out their many-headed weakness.

The dwarf who would become Queen Tholtig's grandfather rose to power after driving off a size 70 titan that had slain the previous leader. This same dwarf began the eternal war against the elves, unwilling to tolerate their abhorrent cannibalism, and the resulting bloodstained history has been passed down under various names: by the dwarves, Gemesh Giken, the Conflict of Lightning; by the elves, Vesifa Relimi, the Conflict of Martyrs. The war was fought by a sprawling elven empire of forest retreats on many fronts, against the humans and goblins as well as the dwarves. Its full tale is told here. 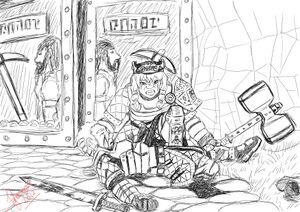 "A Mother Loses Her Child" by igorgitirana. 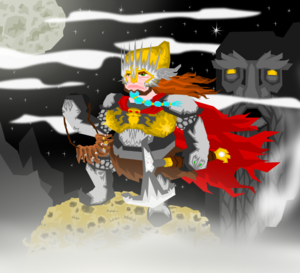 An example for all elite soldiers, by PlutoniumApe

Listed here are the greatest heroes of the Conflict of Lightning.

Goden Leadybridges the Talon of Shooting, scion of the first ruler of Circletower - 294 kills

Unib Lancemet the Way of Boiling, sister of Alath and Olon - 8 kills

Erush Racktoned the Rough Miseries of Quiescence, daughter of Tholtig, crown princess of Circletower - 1007 kills, slain by Washey the titan, returned after 100 years to again plague the dwarves

Obok Willbolt the Drinks of Ruining, only grandson of Alath - 1654 kills 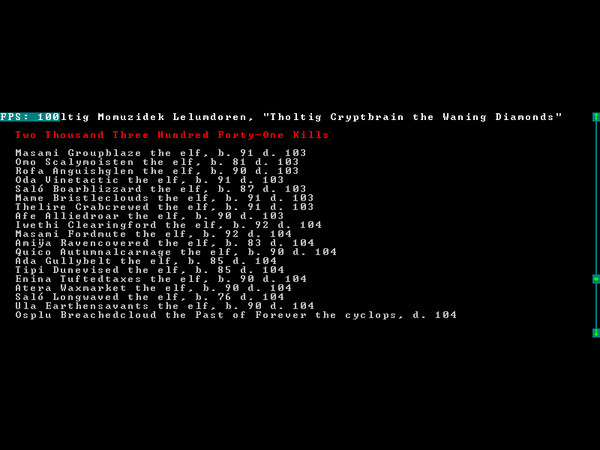 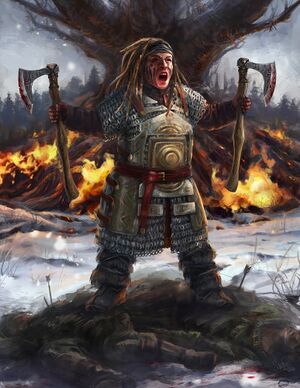 Over 8000 elves died in the Conflict of Martyrs (not counting those who fell in the concurrent wars with the humans and goblins). The number of deceased dwarves came down to less than 500. In the end, the dwarves only lost because their champions died one by one to old age, until there was only Tholtig left alone against their onslaught, before old age forcibly separated her spirit from her weapons as well.

A story is told by the dwarves to their children, that one day, when demons rise from the underworld to bring about the world's end, Queen Tholtig will lead out her clan of heroes from their tombs under the mountain, as well as a horde of the skeletons of elves slain by her and her people, and the ensuing clash will tear the surface of the earth asunder.

A different legend is told by the elves. They say that Tholtig's spirit is still walking the realm and possessing elves, causing moods and forcing them to perform depravities like chopping trees to make wooden rings, amulets, and bins...