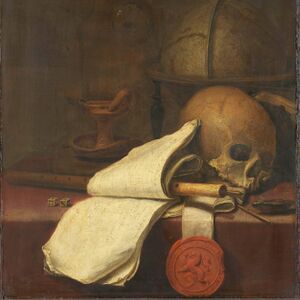 Only two things are certain in Dwarf Fortress: Fun, and the legends you leave behind

Legends mode is one of the three main methods of interacting with an already-generated world. In Legends mode, players can view maps, histories of each civilization and any figure who has lived or died in the generated world. Any noticeable achievement made by the player in Fortress or Adventurer mode is recorded and is viewable in Legends mode. You may explore Legends mode after you generate a new world.

Many players choose to generate a world where the option 'Reveal All Historical Events' is set to YES (the default) - however, if you set the option to NO, then the vast majority of the world history will be hidden in Legends mode until uncovered by brave adventurers. Even when set to YES, some things may not be revealed; all events will be revealed, but some historical figures, sites, regions, and civilizations and other entities may not be, possibly because they are not known to any civilization.

Ways for an adventurer to uncover events and other things include:

You don't have to have had an adventurer or fortress game active in order to use Legends mode - some players simply enjoy it for the option of looking at the interactive historical map, or to read about the last time their favorite kingdom went to war, or for the ability to export lists of all the sites and governments active in the world. In fact, Legends Mode cannot be entered if there is an active adventurer or fortress in the world. However, a copy of such a world can be made, loaded in the game and the current mode retired or abandoned, then opened in Legends mode.

By accessing Legends mode, you are deciding to reveal all the knowledge of the world that would otherwise be discoverable only in pieces, through Fortress or Adventurer Mode. When you choose "Start Playing" in a world that doesn't have a current Adventure or Dwarf mode game, you will be presented with Legends Mode.

Note: If you are already playing a fort or adventure on the save you want to use, you can make a copy of the existing world from the save folder, and then retire the fortress from that copy.

Press Enter while looking at the map to change between the political and geographical view of the world. The geographic map is colored (blue seas, gray mountains, green forests etc.) while the political map's background is tan (think parchment) with colored fields corresponding to the territories of different civilizations. Multiple civilizations can lay claim to the same area, causing the colored territory markers to overlap. You can also see how territories change over time, by moving 10 or 100 years forward and back through time. Pressing c while looking at the political map will show local government territories instead of civilizations, but that's generally a pretty messy scene.

Legends mode has built-in tools to export lists of events, maps at various scales, and data such as locations of sites. This is particularly useful as input data for the utilities described below; there are even tools to make this export process easier (see next section).

Once you've generated a world, you can dump much of the historical data into an XML file for external analysis. The XML dump currently doesn't include every detail of world history, but it contains many of the important ones. Be warned that a large world with, say, 1000 years (or even 10,000) of history can produce an XML dump up to a full gigabyte in size, which may prove unwieldy. Press x while in Legends mode to produce an XML dump (it will be placed in the root Dwarf Fortress directory and named the same as your game's save folder) See XML dump for information on the XML file's format.

Another option is to export the map/gen information by pressing p in Legends mode. This produces three .txt files and one bitmap image that are placed in the root directory of Dwarf Fortress. The exported data files are named by the save file name, and the current world date:

Pressing d in Legends mode reveals a list of the different kinds of map you can export. The images are exported to the game's root directory when you highlight the one you want and press Enter.

There are many utilities that work with the data exported from Legends mode, or make exporting that info easier.

Export processing script can automate processing of Legends information, and is included in the Windows Lazy Newb Pack. If GIMP is installed, the script will use Dwarf Map Maker (see below); optipng can be used to compress the images from bitmaps to .png files. This tool previously also removed non-printing ASCII characters from the XML dump, that could crash Legends Viewer (usually caused by DFHack's workflow), and creates a compressed folder for each region suitable for Legends Viewer (or simply compresses the XML, if some parts have not been exported).

The most famous is likely Legends Viewer, an alternative interface that recreates legends mode from exported data with many more features such as graphs, filtering, sorting, and hyperlinks. There are alternative tools with similar functionality, including World Viewer.

The Dwarf Map Maker is available as a GIMP script (free software) or a photoshop actionscript. Both use the detailed maps to produce a pretty fantasy map that looks somewhat like a satellite image. The GIMP script is called as part of PeridexisErrant's legends processing script, if the dependencies are present.