The default way of distributing content for Stonesense is to create an archive of the XML configs and the image files. Upload this archive together with a description to the Utility:Stonesense/Content_repository page, in much the same way tilesets and graphic packs are distributed for Dwarf Fortress, see the Tileset repository for reference.

Keep in mind that users installing your content pack will need to place the files in the correct content folder (creatures buildings, etc) and add the XML files to their index.txt file.

Stonesense searches for images in the order that they are found top to bottom in the index file, then in the definition files. So if you are adding a custom set of sprites for something already in the system, you need to add it to the *top* of the index file.

Understanding how Stonesense deals with sprites is central to anyone who wishes to modify the content. The scheme is not very complicated, and this guide will give a short introduction to how they work. The way sprites are loaded is fairly generalized. With the exception of floors, which we will discuss later, all sprites are 32x32 pixels big and come in groups known as Sprite Sheets. There are no alpha values yet, so partial transparency is not supported. RGB 255,0,255 (Magenta pink) is considered fully transparent. All sprites are loaded and rendered in 32bit fullcolor pngs.

Here's an example of a typical Stonesense sprite:

Note that, in order not to conflict with neighboring sprites, a sprite must actually be within a smaller area than its 32x32 block. A template for the area used by most sprites is:

The solid area is the floor space taken up by a sprite, while the dotted box indicates the volume above this area corresponding to one z-level.

There can be an arbitrary number of sprite sheets configured for Stonesense, yet some are always present as they contain default sprites (see further down). Most of the content XML files allow users to specify sprite sheets, and this is done by adding a file attribute to the content nodes. By convention sprite sheets should be placed in their appropriate folder, with creature sprite sheets in the creatures folder etc. For more information on this, see the specific pages on content configuration.

A very helpful tips for modders: Pressing F10 in Stonesense will bring up a screen where one can cycle through all the loaded sprite sheets, with sprite indexes superimposed.

Sprite Index (sometimes referred to as Sheet Index) is a concept for referring to a specific sprite on a sheet. The index starts with the upper left sprite which has index zero. It then increments to the right. Stonesense is hardcoded to 20 sprites wide sheets, this means that the last sprite to the right in the first row has Sprite Index 19. The first sprite on the second row has index 20. This boundary is hardcoded and changing the size of the sheet will not affect it.

This image shows how sprites are indexed. Note: Grid added for readability.

objects.png is the default sheet for buildings and vegetation. Also used for all hard-coded content, like default plants, the cursor, default walls and liquid.

creatures.png is the default sprite sheet for creatures. If no file is specified in a creature node, this is the sheet it will use.

floors.png holds all the Stonesense floors. Unlike the other sprite sheet, this sheet is hard-coded with sprite dimensions of 32x20 pixels.

The first thing the game does when loading the creature configuration is to look in the creatures/index.txt file. It uses this file to tell it what configuration files are available, and in what order to load them (this becomes important later). The format of the file very straight forward; each line specifies the path of a file to be loaded. The paths are relative to index.txt.

As you probably guess, this defines three creatures by their ID: A rhesus monkey, a muskox and a cow. The three animals use the sprites numbered 2, 25 and 5 respectively. No special sprite sheet is specified, so the default creature sheet will be used, creatures.png. More on this later.

As you can see, each creature is identified by a gameID attribute. This has to match one of the known creature types in Dwarf Fortress, as defined in the [CREATURE:critter_name] part of the raws. This gameID tag is case sensitive. If Stonesense is unable to match your gameID with one from Dwarf Fortress, a log message will be written to Stonesense.log upon loading a map.

The <creature> tag can be quite a bit more advanced than what we've seen so far. One thing it is often relevant to distinguish is creature professions. A creature's profession is set by the game, and examples might include "WOODCRAFTER", "ADMINISTRATOR" or "MACEMAN". A complete list of creature professions can be found here. Also note that all races have the same creature strings, meaning a dwarf swordsman will still be a "SWORDSMAN".

To separate creatures on their professions, we first need to add a <variant> node to the base creature node. By adding a prof attribute to this node, we can display different sprites for different creature professions.

Let's have a look at a typical creature configuration that includes professions:

Here we see three professions defined. Notice how the <creature> node now has been expanded.

Also note that the <creature> node still contains a sheetIndex attribute. This is the default creature sprite, meaning that if a dwarf does not match any of the <variant> nodes, it will be shown as this sprite index (in this case 0). The corresponding sprite sheet (here called dwarves.png) would look something like this:

Children and babies always have the professions "CHILD" and "BABY", and these can be used to have indicate creature ages. Consider the following example for cats and kittens:

Here the cat sprite would be at index 20, and kittens at 21.

Each <variant> node can be extended with a sex attribute to add an additional condition for creature gender. For most races. dwarfs included, the attribute can have one of two values, "M" for male or "F" for female. However, if the creature has more than two castes, a number must be used, starting from "1", and continuing in order that the castes are listed in the rawfile. As of Stonesense Felsite v3.1, castes can be specified by name such as caste="WARRIOR". Again a simple example would be beneficial:

This simplified human config shows two different sprites used for bowmen. Male bowmen will use sprite index 106 and female bow-women will use 107. Another very important thing to note here is the last entry, which only specifies a gender, and no profession. This means the only criteria for this node is that the creature is Human, and it's female. Hence 101 is the default sprite for human females. Together with the default sprite defined in the <creature> node itself (sheetIndex = 100), it allows us to have separate default sprites for men and women.

Sometimes creatures appear as zombies, or skeletons. To tell these creatures apart from normal ones, you can use the special attribute to the <variant> node. It accepts three types of arguments, Normal, Zombie or Skeleton, and is used in the exact same way as the sex attribute.

As of Stonesense Slate RC2, creatures can be automatically colored by numerous factors, using the color attribute. Valid values are:

profession: The sprite is colored according to the creature's current profession. this works the same way as in Dwarf Fortress.

bodypart: The sprite is colored according to one of the creatures body part colors. this requires an additional bodypart attribute that describes which body part to get the color from.

material: The sprite is colored according to the floor it is standing on. this probably not very useful, unless you have a chameleon creature.

vein: Same as above, but the color comes from the ore veins, disregarding constructions.

layer: Same as above, but the color comes from the rock layer, disregarding veins and constructions.

none: No color is used.

An example should help:

Adding animations to creatures is really quite simple. But before we dive into it, it makes sense to look at how Stonesense animations work.

Currently, the game cycles through six frames at a steady pace. The speed at which these frames are cycles can be specified in the init file, but it global and shared between all sprites.

To add animations to a creature, we add another condition attribute, frames, to the <variant> node, like this:

An example Let's make an animated Giant Bat, using this awesome sprite sheet made by Beefmo:

Now, to configure up a basic animation for a giant bat, we could add something like this to Wildlife.xml:

This will create a simple 2-frame animation. Each frame is used for the same length of time, since the default is used for frames 0, 1 and 2, and the overriding variant is used for frames 3, 4 and 5. Hint: If you want the bat to flap its wings faster, change the frames for the variant to "024".

But Beefmo's giant bat sheet has three frames, so let's add them all for a complete animation:

Notice how the frames are used twice, to make a nice cyclic animation. The indexed sprites will be drawn in order 0 1 2 2 1 0.

Vegetation content can be found in the vegetation folder of Stonesense.

Just like with all the other configurable content, the active plant and shrub XML files are outlined in an index.txt file.

The buildup of these XML files is very simple. Take a look at this example config file for trees:

And this one for shrubs:

Note that the only difference is the root node, both of which contain <plant> nodes. The plant nodes should be rather straight forward; it only has two attributes:

Which sprite sheet the sheetIndex attributes refers to is specified by the file attribute in the root node. The examples above uses "trees.png" and "shrubs.png" respectively. If no file is specified, it will use the Objects.png in the Stonesense root folder.

Tree saplings and dead trees can be defined as well by adding the appropriate keywords to their plant entry:

... will still select for dead saplings.

Building content can be found in the buildings folder of Stonesense.

Each tile in a workshop has a PositionIndex, starting at 0 for the northwest corner as shown in the 3x3 examples below: 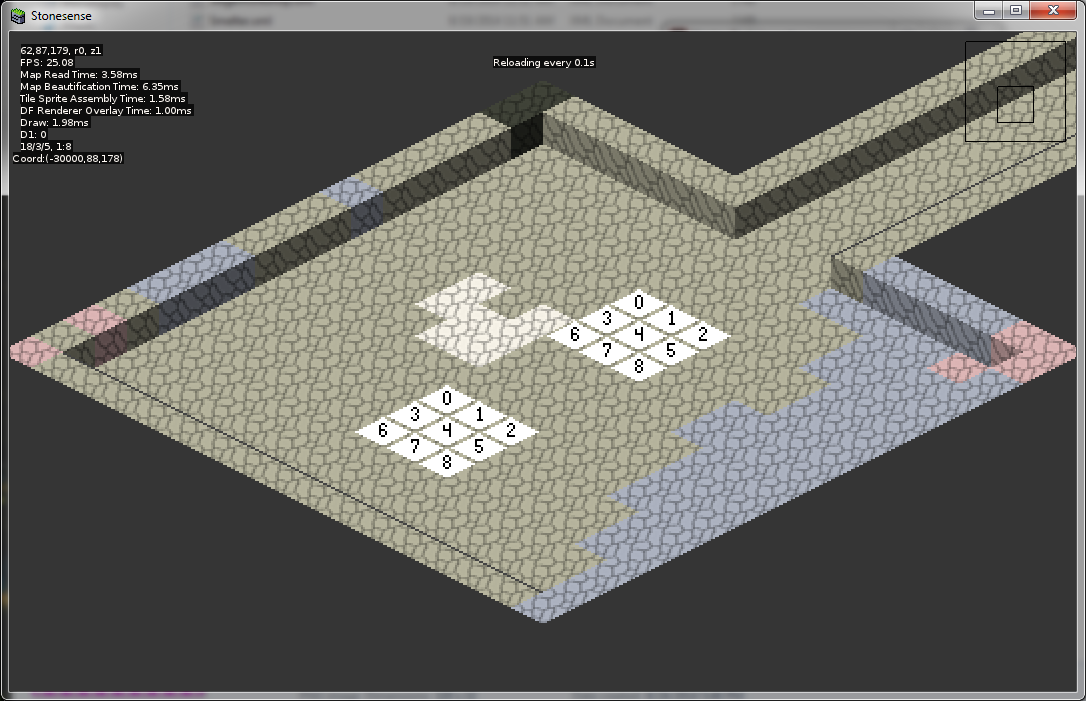 This workshop was generated from the simplest possible code, to serve as an example for basic workshop construction. Far more advanced processing is possible, as can be seen from the content included with Stonesense.

The above XML code and this graphic produced the example seen above. Note that only the "floor" of each tile was defined in this spritesheet. Actual workshops would likely include taller images.