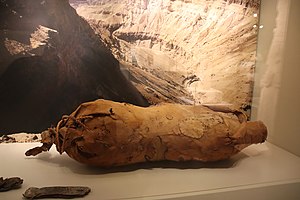 Leather waterskin from the ancient times.

Flasks are containers used by dwarfs to carry alcohol or water while hunting, or on military duty.

There are three different items which fall under this definition:

Flasks and waterskins are functionally equivalent. Vials can be used as flasks or waterskins, and are also used to make extracts; however, soldiers will sometimes choose to use filled vials to store drinks.Bug:3116 Flasks and waterskins cannot be used to make extracts. Flasks can hold up to three units of alcohol or water - alcohol is preferable to water, as it prevents unhappy thoughts and doesn't freeze in low temperatures. Soldiers can be told how to fill their flasks from the military interface - supplies. When not in use, flasks will be stored in finished goods stockpiles.

To drink from a container, hit e and choose "water" (or whatever it is filled it with). To fill any container, stand next to a liquid water source, Interact with the container and choose "fill"; they can also be filled from pools of other liquids, such as blood; or with snow, though not ice; or from containers in the same tile, like barrels or jugs.

In adventurer mode, the water in any container will freeze after some time in cold enough weather. The resulting ice can be licked instead of drunk, but doesn't quench thirst or melt from this action; however, the ice can be melted using a campfire, by Iinteracting with either the container or the ice.

A flask or waterskin can be worn inside an item of body clothing, defaulting to the upper body. If an adventurer is wearing nothing on their upper and lower body, they will not be able to wear either. If all other items are removed from the body part that the flask or waterskin is worn on, it will be dropped when time passes. Wearing either does not appear to affect the freezing of its contents. The Be extravagant need is not satisfied by wearing an improved quality flask or waterskin, probably because they are worn in clothing instead of on a body part.