Irrigation is the process of adding water to a rock tile so that it can be farmed (before version 0.31.19 this included all underground tiles, not just rock tiles). This is done by flooding the tile with water. Any amount of water will suffice but the less water, the better — farms cannot be built on any square containing water of 2/7 or deeper. Tiles of depth 2/7 will flow into nearby tiles until the area is 1/7 if possible, so this is only an issue if deep water is placed in an enclosed area. Once the water has evaporated or been allowed to flow away, the tile will remain muddied unless a construction is built over it. Viewing the tile will cause it to display 'a pile of mud', 'a small pile of mud', or 'a dusting of mud' in its contents.

As of version 0.31.19, where underground farm plots were allowed on unmuddied soil, irrigation is only needed for biomes lacking soil (namely glaciers) and for making farm plots deep underground.

Farms can be built on unsuitable ground but doing so will display a warning message. If even a single square of the farm is not irrigated, it will be unusable.

Magma, for obvious reasons, cannot be used to irrigate but can cause fun.

One obstacle to early irrigation is the time required to build mechanisms (which cannot be taken when embarking and take time to set up). They can also be daunting to newer players and mistakes can result in floods or famine - common sources of fun. The methods below are designed to work without mechanisms.

Most areas contain murky pools, which provide one of the quickest, simplest methods of starting a farm. Digging out an area near a murky pool and draining the pool into it is an easy way to make the ground muddy and farmable.

You should first locate a pool near where you wish to put the farm. While any finite water source works, you need to drain the excess water somehow or allow it to evaporate, so smaller pools are usually preferable. Once you find a good location, dig out the room and dig a tunnel that ends with only 1 tile between it and the pool. If you want to simply allow the water to evaporate after irrigation, the floorspace in the farm should be about 5 or 6 times that of the pool. Otherwise, you can dig another room out underneath the farm via stairs placed on the opposite side from the pool to drain the water after irrigation.

Finally, channel out the one tile between the tunnel and the pool and the water will flow in.

If you miscalculate the area, there are two possible outcomes, both easily solvable-

It is possible to irrigate an area by carrying water in buckets from virtually any source, such as a brook, a river, or a good-sized murky pool.

To do this, select a subterranean area to locate your farms. You must then dig out two identical rooms, one above the other. The bottom room is where your farms will eventually be built, and the top room is where the actual filling will occur. Once you have dug out both rooms, you will need to channel out the floor of the upper room, making sure to leave a walkway around the perimeter.

Once you've dug the channels in the upper room, you should have something like this:

(If you haven't dug the farm level by this point, you will have down ramps in your channeled tiles. Tunnel out the z-level below, as that is where your farms will be. Also note that if you carve the channels on the surface, the below farm will be listed as Above Ground, restricting certain crops.)

Try to think of it like this: dwarves won't fill a pond that they are standing in. Therefore, you must dig another room above the farm and channel out the floor, so they can pour water down into the room.

Next designate an activity zone over the channeled tiles on the upper room, and set it to "pit/pond". By default, the zone will be set as a pit. To change it to a pond, press P then f. (note: that's a CAPITAL P and then f, it took me three months of playing to figure that out)

If you designate each channeled tile individually as its own pond, you can quickly muddy your planned farm tiles- as only one dwarf can fill a pond activity zone at a time. Another bonus of this method is that you can control the spread of the water very precisely (unlike all other forms of irrigation).

As each pond tile gets its first filling of water (bringing it to 1/7 depth), dezone that pond tile, leaving behind an exact match of mud on the floor below. This process creates "a dusting of mud" on the floor below, which is all that is needed to plant underground crops. Place your farm plots over just these muddied tiles.

When you are finished, the lower floor will look like the following:

You can vary the basic square to any rectangle, so long as it remains 2 tiles wide or 2 tiles long. Otherwise, your dwarves will not be able to reach the central tiles.

If you accidentally add too much water, you can wait for some of the water to evaporate or spread to nearby tiles. Even so, as long as you keep an eye on the dwarves and dezone that pond tile on the upper gallery as soon as it is no longer necessary, you shouldn't have any problems.

Other ways of creating an upper irrigation gallery and a lower resulting farm level are possible, but this is left up to the fortress designers to experiment with. This is simply a guide for players just starting out.

The following methods of irrigation take longer to build, but they are usually more reliable, look cooler and, of course, are more fun.

This method ranks somewhere between easy and complex irrigation as it's set up relatively quickly while not necessarily looking as cool as the complex method. It needs a pump and a river/brook in a chasm though. A lake will do well too.

You start by digging out a tunnel of one tile and a rectangular room near the river exactly one level above the river. The floor of the room has to be at the same level as the surface of the river. It doesn't have to be walled on the side of the river as you'll need some open space for the water to get out. If you have dug it farther away from the river, you should dig another tunnel from the room to the water source so that the pumped in water can get out.

Secondly, at the end of the one tile wide tunnel you'll set up the pump. You'll need a free place next to the light green part of the pump for a dwarf to be able to operate it. It will only be operated once, so you don't need any axles or gears or waterwheels or whatever. Manual pump operation is all it takes.

After setting up the pump (whose dark green end has to be between the tunnel's walls) you can start pumping water into the room. If you have set up everything strategically smartly you should have a pump filling up the room with water. The water should flow through the room and out of it at the open side of the room. After having enough muddy ground tiles you can stop the dwarf from operating the pump and deconstruct it (the pump, not the dwarf!) if you like. After some time the water should have completely left the room or oozed away and you should have some beautiful muddy ground tiles to farm on.

You should also consider a bridge for the farmers to reach the farming plots. The bridge at the exit point of the water should be long enough so that the water won't flow over it and damp the ground at its far end. You can do without that second bridge though as you can deconstruct the pump after the irrigation. So there is already a passage for the farmers to get to the plots.

Good luck! Here's a diagram of this method: 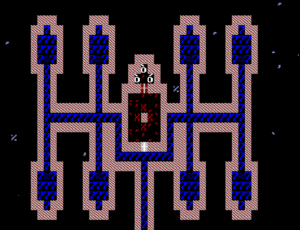 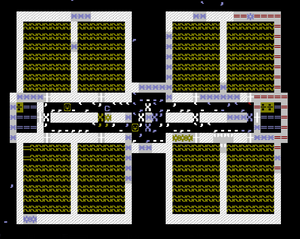 First you need a sufficient source of water. The best would be a brook or river, but it is also possible to use a bigger murky pool (it depends on how many fields you want to irrigate).

For every 7x7 farm plot you need

Use the following pattern:

After your miners have dug the pattern, channel the tile under each hatch cover's location. Now place the hatch covers and link them to lever 1. After that you can place the floodgates and link them to lever 2. To start the irrigation, channel out the last tile to the river / murky pool. Pull the floodgate-lever to fill the reservoirs and pull it again when they are 7/7. Finally pull the hatch cover's lever and release the water to the lower level.

This reservoir contains 70 units of water (10x7). 9 units of water are lost to the ground of the reservoir (61 left). Roughly 10 units evaporate while spreading (~51). The water should be just enough to cover the whole farm plot and evaporate quickly.