There are five different kinds of surface rivers in dwarf fortress. These are major rivers, rivers, minor rivers, streams and brooks. For most purposes all of these will be referred to as simply rivers and brooks since the only real difference between the first four types is their appearance in the regional map, their width, and possibly their rate of flow. Brooks being the smallest type of surface river do have the unique property that they can be crossed safely without needing to swim or even get ones feet wet.

In fortress or adventure mode rivers can be seen as dark blue ≈ and ~ tiles stretching from one edge of the map to another. Rivers come in a variety of sizes from the major rivers spanning as wide as 40 tiles to tiny brooks which are only four tiles wide. River tiles will also be constantly blinking which indicates that the water has flow. Rivers are an effectively unlimited source of water flowing from the upstream side and leaving the map at the downstream.

To determine which direction downstream is you can carefully look at the ends of the river using k to look for tiles that have less than 7/7 water in them. This low point is the downstream side of your river. You may need to remove a small amount of water from the river before you can identify which end is the downstream side. Alternatively you can also turn on SHOW_FLOW_AMOUNTS in your init.txt file which will reveal the depth of water without needing to use k to look. This will however remove your ability to see flow. A dwarfier method would be to kill something, gets its blood in the river and observe the direction of its movement.

Rivers cannot be crossed without first building a bridge, drawbridge, or floor across them. Dwarves finding themselves unfortunate enough to be in a river are likely to be quickly swept downstream and drowned unless they are exceptionally good at swimming.

Brooks are the smallest type of river. They have a unique property that allows creatures and wagons to travel across them without swimming. Walking across a brook will not even get your feet wet. A brook can easily be identified by the white and cyan ≈ and ~ tiles on the surface. Like a river these tiles will be constantly blinking indicating that they have flow. These lighter colored tiles are a special kind of floor tile which acts much like a floor grate. Fluids, such as magma and water itself, will fall through it, and fisherdwarves can stand on the surface to fish.

Water wheels will not function if placed directly on a brook. In order to use a water wheel on a brook, you must dig a channel through the surface of the brook, which removes the special floor tile which makes the surface of a brook walkable. Once this is done a water wheel may be placed normally. In all other respects brooks function exactly like any other river.

On the regional map there are actually five different classifications of rivers identified by their appearance and the text displayed at the right side of the screen when you place your cursor over one of them. The five different classifications from largest to smallest are major rivers, rivers, minor rivers, streams and brooks. Brooks are not directly visible on the regional map but can be still see in the left most window and will also be indicated at the right if you select a tile containing a brook. 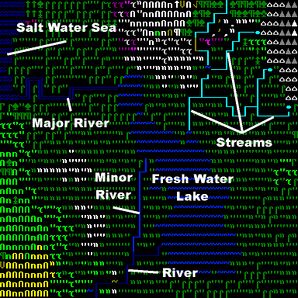 Different sorts of rivers in action; note that the labeled Brook is actually a Stream

Rivers are found on the surface of world maps. They vary in width and flow rate, some being wider than others. They often flow through deep canyons or just across the flat surface of a level. On levels with cliffs, waterfalls may be found.