Savannas are biomes covered in grass, other plants are plentiful. They are very similar to shrublands or grasslands. The first few layers of Savannas are soil (possibly including an aquifer), which benefits above ground farming. These biomes contain fewer trees than forests, although they usually have enough to get by unless you need large amounts of wood for fuel. They usually have plenty of murky pools, and often have brooks or even rivers. They tend to have less ore than mountains, but as with any biome, you can find some if you dig down a few z-levels and look hard enough. 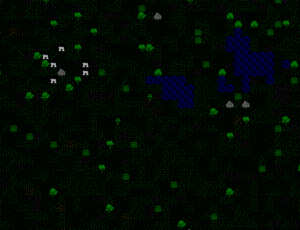 A temperate savanna with a bunch of rhesus macaques.