Magma is red-hot molten rock present in volcanoes, as well as magma pools and magma pipes. It serves as an energy source, powering magma forges, magma glass furnaces, magma kilns, and magma smelters, which do not "use it up" in any way. It is extremely dangerous, and has led to the death of many dwarves, and many fortresses.

Magma never cools, but can evaporate if left at a depth of 1/7 for long enough. If mixed with water, it can form obsidian (see below).

Lava is the same substance. Magma is what it is called underground, while it is called Lava if it is above ground.

While picking a starting location, the easiest place to look for magma is on or near a volcano (a red ^ mark in the "region" screen). There are often volcanic islands (easy to find, since they are the sole land in the middle of oceans), but since sea travel is not yet implemented, trade with other races may not be possible on such islands. Instead, find a volcano on land, and (optionally) start looking for a vent in nearby squares. "Nearby squares" can mean anything from literally on top of the volcano, to adjacent, to quite a long distance away indeed. The placement of magma seems to be related to the distance from volcanoes, but is still essentially random.

Magma tends to occur in world map tiles that are primarily igneous extrusive. That is to say, if you select an entire tile on the embarkation screen and press F1 to highlight the most common terrain, the tile will only have magma if the top stone is dark gray, signifying igneous extrusive rock. Magma does not necessarily form in this geological zone/biome, rather anywhere in the tile. Even if magma is not evident on the surface, it's almost certain to be underground somewhere, though the chances of finding it without reveal.exe are still slim.

Much harder than simply finding magma is finding magma that is also near suitable terrain for building. Depending on your requirements - you may be looking for a source of running water, or a mountain for minerals, or a healthy tree population, a layer of flux for steel production or even all four - suitable building sites can be extremely scarce.

Since volcanoes show up on the region finder, and other magma sources don't (by default), you may find it easier to simply check all volcanoes on a map for suitability, and generate a new world if none are suitable, rather than scouring tile after tile for magma vents.

If you're willing to search exhaustively, you might want to consider finding magma that is not near volcanoes at all. Very occasionally, magma will be visible in the middle of forests, plains, or other terrain nowhere near a volcano or even mountains. There is no way to spot these on the region map, so you have to review the local maps. This can be done in-game, but since it involves a lot of scrolling and is very tedious, you can try exporting the local map of the world which can be much more quickly searched for the distinctive red ≈ symbol.

You can also occasionally find magma that does not extend all the way to the surface, and therefore is not visible on the local map. These are much more numerous than surface-visible magma vents; however, they are almost impossible to find by chance alone. These smaller magma deposits appear in the same places as normal magma vents - near volcanoes, or, failing that, near other known magma. Using the site finder, however, you can easily search for a site with a magma pool or pipe without having to manually check each tile on the world map. Note that unless you edit init.txt and set the SHOW_EMBARK_M_PIPE and SHOW_EMBARK_M_POOL settings to "ALWAYS" (or perform custom world generation to make the features visible during embark), you won't know exactly where the lava is prior to embarking, just that it exists. Depending on whether or not you like a little mystery, this can be turned on or off at will.

On a map with a magma vent, the magma will be clearly visible from every level ground and below, unless the map is in a Freezing area. In Freezing areas, the top few levels of the vent will have cooled to form an obsidian "cap". This should still be readily recognizable however, as it will comprise a circular area.

The vent has a similar, circular shape on each level. However, it is not identical from one level to the next; some levels will have a larger or somewhat misshapen circle of magma.

The primary use for magma is to power magma smelters, magma glass furnaces and magma forges. (There are other uses, including defense, obsidian production, and possibly even garbage disposal.) To build forges, etc. on magma, at least one of the external eight squares must be above a square of magma.

This can be done most easily by simply building on ground level. The magma is visible from ground level but is actually contained one level below ground level, just like any ground-level water source.

To build underground, you will need to dig at least one tile of a channel down from the location you wish to build the smelter or forge. Eventually, flowing into this channel (on that lower z-level immediately below the forge or smelter), there must be magma, either from the pipe/pool itself or channeled from the vent. You can simply build a tunnel straight into the magma (and lose the miner who digs it 99% of the time), or use channeling to tap into the magma safely from the level above - this latter requires the lower level to be wider than the upper, to jut out so that last tile can be channeled away from above to free the magma into the tunnel system on that level.

Tapping into magma directly is usually safe provided that you are prepared for it (see Pressure note below). Unpressurized Magma is much slower than water from a river source, and can be stopped by any magma-safe floodgate, door or etc. with a bauxite mechanism. Take care however if you are using a screw pump to pump magma into a tunnel/funnel with a cistern below - the pump will make the magma overflow as it would with water.

Volcanoes and magma pipes slowly replenish their supply of magma. A miner with less than Unbelievably Agile will die when breaching a magma tube as he can't move away quick enough.

Magma can also be used to produce obsidian, a stone which has a base value of 3 (compare with 1 for normal stone and 2 for flux stones), and which can be used to make swords at a Craftsdwarf's workshop.

Volcanoes do not house nice things - Fire men, Magma men, and Fire imps all have their habitats in magma. All of these are attributed to innumerable cases of fun, especially with newer players and forts starting off a bit too close to their volcanic perches.

There are several things you can do to prevent fun.

Magma is a non-Newtonian fluid and as such will not be affected by pressure under normal circumstances.

Thus it can be safely passed through tunnels to be used at a lower point in the fortress.

A frequent mistake, however, is to assume that a channel is sufficient to cause magma to fall. While magma will not rise out of a channel, it can flow over the top once the channel fills up.

Another common mistake has to deal with magma pipes and volcanos in Freezing areas. Many people will channel into the obsidian cap and then into the magma through there. However, once a tile of the obsidian 'cap' is breached, the tile directly above the breach will then be included as part of the magma pipe and the magma will begin rising until it has filled that square. For fortresses that tapped into the magma, this can result in waves of magma slowly filling up the fortress from the bottom level up to the magma pipe's new top level. The magma can continue to rise all of the way to the surface if an entire section of the obsidian cap is channeled. The magma will not harden into obsidian again, though, just from the cold temperatures. 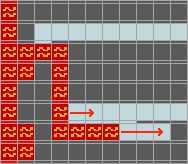 Danger: This will overflow (cross section)

Also note that screw pumps can cause magma to behave oddly. Magma that is emerging pumped from a screw pump will behave as if pressurized, and be forced upwards to the same level as the pump. However, this pressure is only exerted by the pump itself - once on the other side, the magma will flow normally again. It is possible to use this effect to channel magma from distant source. If you happen to have constructed your fortress very far from the magma source, you can use a screw pump to "pressurize" the magma to force to flow much more quickly. Where unpressurized magma might take years to flow across the map, pressurized magma would just take a few days. 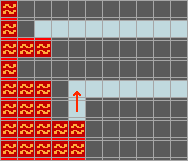 Magma pipes are not pressurized and will flow predictably (Magma#Magma_flow).

There are exceptions to this rule. If there is a floor or wall above a magma flow tile, it will not produce magma above the floor/wall.

Note that since the addition of magma is quite slow, if you intend to breach only a few tiles to fill with magma, it might evaporate at a faster rate than replenishing. A single tile of replenishing magma will most likely evaporate with as little as 5-10 open tiles.

Magma is a non-Newtonian fluid. As such, it acts like water in certain circumstances, but acts differently in others.

Some objects that come in contact with magma will function fine, no matter what their material. Others will melt or cease to work properly unless they're made of magma-safe materials.

If even a single component of a submerged building melts (whether a chalk mechanism on a steel floodgate or a copper sword in a weapon trap), the entire building will deconstruct.

Fire imps, firemen, magma men, and fire snakes inhabit Magma. Fire snakes are a type of vermin that can set your fortress on fire with little to no warning. Like all other vermin, they may spawn a short distance outside their native environment, meaning they can appear in any region near a magma pipe, even if the region and magma have no physical connection. However, they only spawn near natural formations. They will not spawn at a channel you have dug to another section of your fortress.

Magma is almost harmless if temperature is disabled in the Dwarf Fortress init file. It can still trap and suffocate or simply starve your dwarves in some situations. It will not melt bridges, etc. constructed of non-magma-proof materials.