Cutting down trees tends to cause heavy traffic as the woodcutters do their thing and haulers come to take the logs to a stockpile. Heavy traffic, in turn, kills the grass and reveals the underlying soil layer. If said soil layer is sand, then the traffic will reveal the sand. So it can look like cutting trees spreads the sand around. --LegacyCWAL 21:46, 30 March 2009 (UTC)

This seems a bit confusing. Is it possible to collect sand without bags? Without a glass furnace? What do you set to get your dwarves to do it?--Xazak 17:56, 3 November 2007 (EDT)

You can't collect sand without empty bags or a glass furnace. The command to gather sand is issued from the furnace itself.
At least, that's how it was back in the last version-I doubt they changed it, though.
Kefkakrazy 18:37, 3 November 2007 (EDT)

Absence of sand and moods[edit]

Are you screwed if a dwarf enters a mood, requires raw green glass, and there is no sand on the map? Presumably in such a situation you'd want to specify glass blocks from the traders ASAP. I just had a dwarf go berserk for want of green glass ... although he was a lowly hauler, so whatevs! Julius 14:37, 13 November 2007 (EST)

So far, in all my fortresses, my dwarves never asked for something they could not find on the map for their moods. In my current fortress, I have a lot of items made of rock, wood, bone and leather... --Eagle of Fire 20:16, 4 December 2007 (EST)

In a mountain/forest biome I have no access to sand, the trader did not bring any sand bags or glass of any sort. My dwarf mumbling "Amnekothos Mukargashcoz nee raw... green..." in the glass furnace was unfortunately out of luck - and was stricken by melancholy.--RadGH 05:50, 12 April 2010 (PST)

I have had a fort where there was no single sand at all...but after some years small squares of sand has appeard at places where my dwarf travels alot. Is it possblie that sand can be made? (Keilden 06:20, 21 January 2008 (EST))

I believe this is caused by the dwarves killing off the vegitation covering the sand. I don't think you can create sand in areas where there is something else underneath, such as silty loam.--Kingzilla 19:03, 21 January 2008 (EST)

Then there's something else wrong, not a lack of sand. The raws determine the sand or not. I've gone and added sand to a map that originally didn't have any by adding the proper tag. If the zone says it's sand, then it's sand, and something else in the collection is the problem. --Edward 20:35, 22 January 2008 (EST)

Types of sand for glassmaking[edit]

If you want to write a guide to sand, go ahead. It is a wiki, after all ;). I think it would be easier to rewrite the second paragraph though, making it clearer that stuff like sandy clay isn't actually sand. --LegacyCWAL 17:20, 3 March 2009 (EST)

I updated it some, the second paragraph that is. I don't feel that "How to make bags" should really be there, but since the bag page doesn't have it yet, I left it. I think that this still needs work, but is much clearer. I would like to verify exactly which tiles you can draw sand from and which you can't, as well as how many dwarves can draw sand per furnace. Amusingly I've never had sand on a map I've played, which is why I asked in the first place. Inoko 06:14, 4 March 2009 (EST)

In some forum there was mentioned that one may dig for sand near a river, in the sense that this might create some previously hidden areas of sand for bag-collecting. can this really be done? and how? --Koltom 19:41, 3 March 2008 (EST)

Just check to see if there's a sand deposit under the soil near the river. Sometimes you get lucky. You can check without digging there as well, just k over the banks under it. – unsigned comment by Chrispy

I'm not sure 'digging' is the right word - you may need to pump water for sand. I just found an underground pool with a sandy bottom on a map otherwise lacking in sand. Multi-level water pumping? Gee i'm glad i practiced building under the ocean not too long ago... --Squirrelloid 19:02, 22 April 2008 (EDT)

Yes it's true, I was shocked to discover a piece of black sand next to my undeground river and I know for a fact that there was otherwise no sand on this map because when I embarked I would've brought a glassmaker with me initially. --Gamli 01:11, 21 November 2008 (PST)

THAT would be because towercaps change rock to soil when they grow. And sometimes it's sand --Dorten 04:25, 21 November 2008 (EST)

Is Sand Ever Available in Caravans?[edit]

Sadly, no. Caravans don't carry sand and it isn't available as something you can request. I expect Toady will eventually take care of it in an update, but for now you're out of luck. You shouldn't actually need it though since moods no longer require glass if you have none and have no way to make it on your map (no sand). --Janus 08:48, 22 August 2008 (EDT)

If you don't mind cheating, you could either make your soil sand by raw editing. That's what I do, since finding a small site with sand + underground river + magma pipe + flux + chasm - aquifer - underground pool - cave - salt water is a bit difficult. --Savok 12:10, 22 August 2008 (EDT)

I'll work with what I have been given. I have a magma pipe and supposedly an underground river (if the site finder didn't lie to me) so I will work on building some sort of obsidian monstrosity if I get bored. I am too new to DF to worry too much about glass anyways! I can't even keep incoming caravans happy! :) --Ehertlein 12:43, 22 August 2008 (EDT)

You can always use gems to make windows. Those can potentially be quite a bit more valuable than glass ones anyway. --Janus 04:27, 23 August 2008 (EDT)

"You shouldn't actually need it though since moods no longer require glass if you have none and have no way to make it on your map": This may be true, but I know through bitter experience that nobles will request glass items on sandless maps. The Hammerer has not listened to my protests. :p --Ookpik 04:50, 12 October 2008 (EDT)

I'm on a map that had no sand (and I lost two glassmakers to strange moods because of it); suddenly after several years a large region of yellow sand is turning up near/in my farms, in areas that had formerly just been muddy gabbro/obsidian floor. It's almost exactly 5 4 years since I first created these farms (and made the ground muddy), and the area has experienced a lot of traffic. Is this repeatable? Can any fort get sand if they wait long enough?--Maximus 01:03, 12 October 2008 (EDT)

If a lot of dwarves travel over a square, it will eventually reveal its base layer, so only if your tiles are all based off sand. Destor 15:12, 12 October 2008 (EDT) 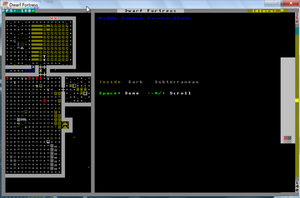 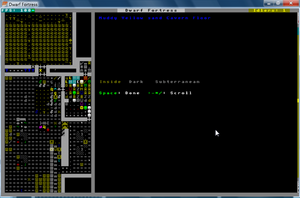 Okay, then, pics:
I've got about 80 yellow sand tiles in this area now. You can see two of them directly (the yellow ≈s); most of them are Muddy Yellow sand Cavern Floors and appear as brown periods (just like the muddy gabbro floors). The water in the channel in the upper left is sourced from a brook with sandy clay loam walls, if that makes a difference... although sandy clay loam does not count as "sand" in the game.

These tiles all started as regular gabbro or obsidian cavern floors, but have been muddy and heavily-trafficked for about four years. I also have a couple of "Muddy Silty clay cavern floors" in the area, which may be a transitional state before they turn to sand.

I've never seen sand anywhere else on this map, not even on heavily-trafficked outdoor squares, including those by the brook. The site chooser mentioned a sandy clay loam layer but no sand.--Maximus 03:59, 13 October 2008 (EDT)

Follow-up: the same thing happened in my "second" farm in this fortress (I moved everything to a different, more internal location.) I didn't actually bother to do any farming, however, since I had such a surplus from the first few years of farming. Tiles that have been muddy for about four years are starting to turn into yellow sand now. Since I've done no farming on these farms, it's clearly not something caused by heavy traffic.

I can't believe no one else has ever reported this though -- muddy stone floors turning into muddy sand after a space of four years is pretty dramatic. This farm was muddied by the cave river, not the "sandy clay loam"-lined brook, so the source of water doesn't seem to be a factor either.

Anyhow, sand, whoo. And this patch of it is adjacent to my magma kiln, even better. Been making terrariums and screw pumps with it.--Maximus 01:23, 2 November 2008 (EDT)

In those cases, though, sand is already there, but hidden under grass or whatever. In this case, sand "showed up" in areas where nothing but underground stone had been. Again, I must express my astonishment that no one else has ever reported this. I never saw it in any of my prior fortresses, but I haven't played since 0.27.169.33e, so I figured Toady added it at some point between then and now. But plenty of people have been playing 40d. I gotta post on the forums to see what's going on. It can't be a bug. It happens in such a logical, deliberate way: after four years, tile by tile, muddied floors are turning into muddied sand tiles.--Maximus 13:05, 2 November 2008 (EST)

A search of the forums turned up a handful of similar stories. So it's not a total fluke, but if it happened on every map, it would be well-known. I wonder what the underlying factors are? Muddy tiles + time seem to be an absolute minimum. Maybe a discovered cave river is needed too (due to the shrub/tree growth it triggers)?--Maximus 14:50, 2 November 2008 (EST)

And here I would tell the same: Underground river? ==> Tower caps grow. They chaange tile material to some (maybe random) soil. Sometimes sand. Happens all the time. In this example saplings appear, get stomped - reveal sand.--Dorten 04:29, 21 November 2008 (EST)

And yet, in a different location where I had mud, sand appeared where there was virtually no traffic for years. So I'm not sure stomping is a necessary part of the formula. Needs more testing.--Maximus 12:50, 21 November 2008 (EST)

Plants will die on their own, too. I'm pretty sure a soil tile is exposed after a dead plant rots away, with the game choosing the type of soil based on biome. If it is near a cave river, this biome seems to be sand. I have a fort right now with tree farms both near the cave river and not. The ones near the river have sand, the one not near the river has silt. There's no mixing and both were made on stone floors; the type of stone doesn't seem to matter either. --nil

So I cant confirm sand yet, but i have granite turning into sandy loam (which is a layer that is present on my map anyway, as opposed to sand. --Birthright 19:08, 26 June 2009 (UTC)

Yes. My point is to check if sand 'proper' will indeed appear on a map where it was not present at all, if there is a progression from soil to sand and/or if there will appear only one type of soil per map - in 40d. --Birthright 00:40, 27 June 2009 (UTC)