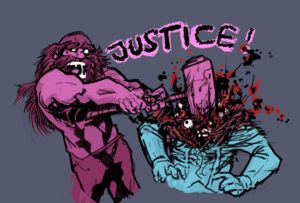 When you forget the Baron's demands for 3 flutes.
Art by gustav_black

Justice is available in the game once a Sheriff or captain of the guard has been appointed through the nobles screen, and is used to deal with dwarves violating mandates, breaking furniture, starting fights, etc. The dwarven justice screen shows details of crimes and punishments, and is available through the z-status screen (even if no nobles are appointed yet).

In some cases, the player has to convict a criminal or suspect, in others, criminals are convicted without player input. In case of mandate infractions, the player is generally not asked for input, while murderers must be convicted by the player. Practically anybody can be blamed for a murder, including tame animals and long-dead persons. The fort population will feel affronted at particularly nonsensical convictions.

Dwarves who misbehave can receive punishments if a sheriff has been assigned. In increasing order of severity (at least that's what your dwarves think):

It is also strongly recommended to use chains, not cages for imprisonment: dwarves on chains are still free to move one step in any direction, allowing them to keep themselves fed and hydrated when food and booze stockpiles or wells are placed adjacent to the chain. Dwarves in cages are entirely dependent on the assistance of others.

"Thank god i only got assigned a long-term jail time followed by a hammering. My partner in crime was assigned to a guard beating, poor bastard's head got pulped after one punch." -Urist Mc. Murderhobo.