Fire, like its real-life counterpart, is an immensely destructive force. Fires can spread and burn dwarves and furniture, generating smoke. Fire spreads over flammable surfaces, items and creatures. Dwarves caught in the blaze might end up dying, and items will slowly get damaged until they get destroyed. In-game, entities which are on fire flash red and yellow. In item lists, anything which is on fire will also be surrounded by double exclamation marks, similarly to ‼THIS‼.

Note that it is currently difficult to safely start (and then, control) a fire. Fire is most easily started by either magma or a fire-breathing attack. An area enclosed by water, metal, stone or Z-level difference can be used to start a fire, which can be used as a way of increasing FPS by removing objects or as part of a complex trap, though this may lead to fun when something comes out burning which then sets the rest of the fort on fire.

Fire will spread to adjacent tiles containing flammable materials, including grass, shrubs, logs, clothes, dwarves (and generally all creatures that are not composed of fire-safe materials), multi-tile trees, wooden furniture, buildings, and roads, lignite and bituminous coal rocks, and bars of charcoal, or coke. Except for dragonfire, fire won't burn rock or metal. Constructions (wall, floor, etc.) will currently never burn, no matter what, even if made of wood. Consider this when fireproofing your fortress-- especially when embarking in a heavily wooded biome.

Fire will not spread across z-levels by itself. Walls with trapped passages block the fire, too. Both shrubs and trees can catch fire, and burning branches can potentially spread fires uphill. When aboveground, spreading fire can cause trees to collapse, and if it spreads too much, this can cause spam as the game repeatedly announces "Something outside has collapsed!" and pauses. Note that these collapses can cause holes in the ceiling of your fortress if it is directly below. Therefore, some forest fires are sadly best left controlled, or not started.

Fires burning in the environment (e.g. burning grass) start at a temperature of 10508 °U and quickly heat up to 10708 °U , while burning items rapidly heat up to 200 degrees above their ignition point (but stay slightly below that, because the surrounding air cools them a bit). Items experience rapid wear-based damage while burning, and continue to degrade until entirely destroyed. Fire-safety for any material is defined as being stable at a temperature of 11000 °U .

Interestingly, because books are considered artifacts, they too will burn indefinitely, but because their copies aren't, such copies will burn up.

In recent versions of Dwarf Fortress, dwarves see fire as a danger to themselves and try to avoid becoming ‼Dwarves‼. However, burning dwarves will carry out typical dwarven activities, despite the fact the dwarf is burning to death, and will spread the fiery destruction to their peers. [Verify] This may not only kill your dwarves, but more importantly, also incinerate a good many useful items. Dwarves will not path through smoke reliably, so if you see a bunch of job cancellations due to pathing issues, a fiery dwarf is probably running around (or other fun is afoot). Alternatively, sometimes the smoke on the burning dwarf's tile prevents them from pathing anywhere, forcing them to be stationary while they burn. And don't, for Armok's sake, let the flaming dwarves anywhere near the booze. Contrary to popular belief, it doesn't explode (and never did), but it will boil away into nothing, which is always fun.

A dwarf catching fire is not an automatic death sentence - dwarves have been observed catching fire, then extinguishing and surviving. 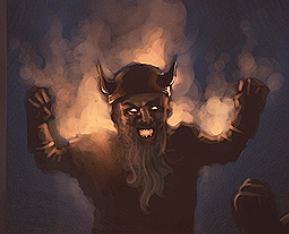 !!Punctuation marks have never been so painful!!
Art by Locus
Retrieved from "https://dwarffortresswiki.org/index.php?title=DF2014:Fire&oldid=285634"
Categories:
Hidden category: