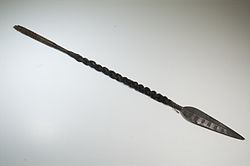 Spears use and train the speardwarf skill. Dwarves can forge spears out of any weapon-grade metal but those with superior edge properties are more effective. For the purposes of building a realistic danger room, less lethal wooden spears may be used if purchased from elves first. All dwarves can equip spears, but some must use two hands.