Note: the snapshot version is out of date.

In addition to the raw images and text data, a snapshot of the actual gfx/char tilesets that I am using is now available at here for download. All the files are the actual files I'm using for the game at the time of taking the snapshot, so it should be ready for direct use.

(you can skip this part... really)

My guidelines in tile pixel art:

I may not always satisfy my own guidelines sufficiently all the time, given the large number of tiles that have to be produced for the gfx set to become usable at the basic level, but I keep the guidelines in mind whenever I do new tiles or remake old ones, when I find better ideas, since I AM producing it for my own benefit and use, motivation will lasts as long as I play the game. But since I find the gfx somewhat useful (could be subjective) I decided to start completing the basic tileset and share it, all in the hope of improving the experiences of some of the players/fans of ToadyOne and ThreeToe's amazing work.

If there are suggestions, especially on improving things according to my 3 guidelines (well, number 3 is a little subjective), please add to this page's discussion. But please do understand that this work is first and foremost meant for myself, so I may not (and will probably never) be able to accommodate all requests. But if I find feasible ideas that can be streamlined into my own goals, and that I can find time to do it, I will incorporate them. So please do not feel slighted/offended if I reject some ideas.

Note that this is transparent PNG, to use as BMP, please fill transparent pixels with color #FF00FF (magenta) in some image editing program when doing conversion.

Still v0.9. Will not be maintained without special reasons.

Note to self: if transparent PNG support is available, would prob be better if 16x16 tileset is used, but shrinked to 12x12 on runtime if the gfx engine uses linear resampling (GL_LINEAR in openGL?) instead of nearest neighbor. But if gfx engine uses nearest neighbor, then prob better to use image editing program to resample 16x16 to 12x12 using so that the partial transparency can hopefully help preserve the overall recognizability of the tiles and retain the tile-page's utility.

This is automatically shrunk from the 16x16 versions with no manual tweaking. So some tiles may become recognizable/unusable. As this is a automatically derived version from 16x16 one, no direct support will be given for this version at this time as I don't want to maintain 2 different sets manually. Just providing an additional channel for people who wants 12x12 instead.

Also, if you think you have a better way of re-sampling the image, you can start from the original 16x16 version.

For the text data, refer to the one for 16x16, but change the line

. Everything else should be the same.

Disclaimer: Most of the following are real captures. A few are faked. Faked doesn't mean that it cannot be done in-game, just that I didn't want to spend the time to do that.

Just when I wanted to take a break, the goblins invade... Currently only do enough to handle goblin's invasion + goblin thieves. No ETA on future additions (on need basis).

Version 0.2 adds the "Blood Horns", the equivalent of the goblin's fortress guards, named for the red horns of their elite soldiers. Being not very particular about hygiene, Blood Horns often use actual blood to color their attire.

Note: I am too lazy to update the dyc version. Blame me.

Notes: I haven't seen these in-game, so I don't know exactly how they look. Would appreciate any feed-backs/screenshots which can help me tweak them.

LOL.. I just realised that these 3 creatures won't appear at all in the game. The raws are not even fully defined. Well, just treat this as hidden stuff, or potential resources for people who actually mod these creatures into their world.

Special tiles for special occasions. (No text data available as these are not meant for usual games, do your own merging.)

Basically, I'm taking things slow and only stop to draw new animals when they actually appear in my current game. But after a while, I feel like a animal wildlife photographer! :) Just getting excited wondering what creature I'll see next (before they end up in the butcher's workshop...)

Hmmm. Thinking maybe I should turn off all hunting and pseudo-play a wildlife conservatory, by creating a large closed surface area safe from invasions and a way to "trick" animals to go in one-way and stay there... 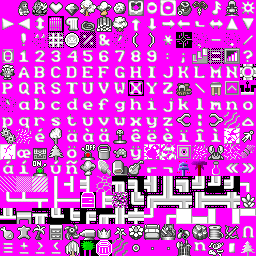 This is the tileset that I've put together from many different sources. Based off SL's work (which in turn is based off other tilesets like GuyBrush and Flying Mage). I also borrowed many tiles from Red Jack's Nintendo set to replace some of the oblique view tiles, modifying quite a number of them. Also did my own share of original work in addition to some of the modifications.

It is done with the intention of preserving the text as much as possible, but I had to sacrifice some of the punctuations. But I see this as interim... after all, there's the Presentation Arc...

For installation, see the instructions on the tileset page. It is also highly recommended to use Accent Removal, to make your text sane.

For the colour scheme I use, see the image page itself.

I guess when I have time, I should pack all the tilesets into separate archives and upload to DFFD... when I can make myself do it... Note that at times, the tile images on the wiki page may be more up-to-date than the "Director's Cut" which is expected to be done less frequently.

This is not a "release". It's a snapshot of the actual files (gfx and char tilesets) I'm using (unmodified), including all of my WIP stuff which may not be released otherwise yet. It consists of more than just my own work so credits goes to their original creators (mainly DR) as well. Content is not expected to be persistent as I do edit/tweak/swap tiles quite frequently. Use of this is up to individual and I will not bear responsibility for anything broken. I am currently still using 39f, but the files I use should be compatible (unless new professions/creature added in new versions, in which case those professions will use probably some default tiles). It should also be compatible with older versions (at least up to 33a) except that some newly added professions/creatures may not be recognized and gets added to error log, but the game should run without problems.

Please read the "sphr_readme.txt" in the main directory within the archive for more details.

Some wildlife tiles not in released tile pages (with names, exact tokens not checked)