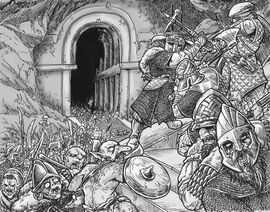 During a war, you will not receive caravans, visitors, or tributes from warring civilizations. A "civil war" with your parent civilization will block standard immigration as well. Additionally, migrants arriving during and after a war are more likely to have experience in general military skills and a random combat skill.Verify

The following events will make a civilization unhappy, eventually leading to war:

It is possible for two sites belonging to the same civilization to declare war on each other, which, due to the way conflicts are tracked, registers as the civilization declaring war on itself.Bug:10878 All of that civilization's sites inherit this war, making each site hostile to all others. It is not currently known if your parent civilization can sue for peace, but it is possible to end a civil war using DFHack.