A wetland is a type of biome, flooded permanently or only periodically, with an abundance of foliage, including heavy, specialized tree-growth and a vast ecosystem. The landscape is very flat, with only occasional, small gradients. Ponds are abundant. Wetlands tend to form around oceanic coastlines, especially where rivers meet the ocean.

They generally have a high water table, meaning that an accessible aquifer is only a few tiles below the surface (and in occasionally unlucky circumstances, directly beneath the surface). It can be incredibly difficult to nigh-impossible to extract stones from these areas, making the long-term feasibility of a fort doubtful; it is recommended that an additional, non-saturated biome be selected as well. The stratification is often hard to ascertain, as it is difficult to penetrate the aquifer. Usually there are a few layers of clay and loam followed, eventually, by stone and rock beneath.

Wetlands with saltwater make habitability more precarious, as the aquifer and surrounding ponds are not drinkable. The water first has to be desalinated.

(freshwater and saltwater, as well as mangrove swamps) 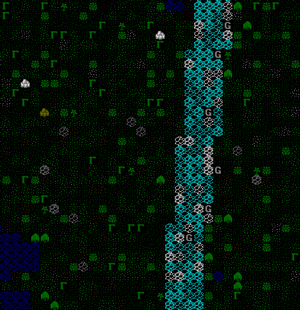 A tropical freshwater swamp with some gorillas wandering along the brook.