Most animals can be encountered in skeletal or zombie varieties when visiting a haunted, sinister or terrifying biome. The type of undead animal is the same as the animals which would be found in a normal biome of the same type, and they are encountered in the same size groups. As of .39c, both megabeasts and semi-megabeasts can also be undead.

Undead are highly aggressive and will attack and chase any living creature that approaches them. Zombie animals move slowly, so dwarves can usually outrun them. Skeletal animals, however, are both strong and extremely fast, making them very dangerous. 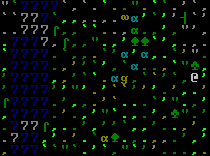 Undead creatures do not need to breathe, and all can swim in water and walk on land, including normally aquatic creatures such as carp, sharks and even whales. While this is only a minor nuisance most of the time, groups of undead carp can pose a serious threat to even a well trained squad. The average dwarf can easily run away from zombie carp, but skeletal carp are a vile force of darkness which should be feared by anyone who confronts them.

Zombies start with brown and grey wounds to several of their organs; skeletons start with grey (missing) wound status on all their organs. Both types appear to be immune to critical hits against organs, making crits with piercing weapons meaningless, although they can still be dismembered by an axe or knocked across the screen with a hammer.

When defeated, a zombie leaves a rotten corpse which should be disposed of to avoid miasma. It will eventually rot completely to leave a pile of bones. Skeletal creatures leave a skull and bones, which can be used immediately by a bone carver.

Undead trees show on the map as Dead Highwood, but an undead Dead Highwood Sapling will still mature into a full grown tree. After cutting down, the logs are indistinguishable from those cut from a living tree. Undead shrubs and grass are useless, though these tainted lands contain a mix of living and dead plants.

Beware undead giant eagles, as bolts have little effect upon them, and dwarves have trouble attacking them in melee. If you find skeletal whales or other exceptionally large creatures... either lock your fort down or consider abandoning.