The feather tree is a special tree that grows only in good aligned areas. Unlike other above ground trees, it yields cream-colored logs when cut down. Strangely, it bears eggs for fruit. Beware the unicorns that may roam around it, or simply import it from elven caravans.

Featherwood is the lightest wood in the game, so it should be used for things that get hauled around very frequently, such as bins, barrels and buckets. This decreases dwarf speed less as they carry these items, since they are carrying less weight. Featherwood shields are also very effective, since a shield's weight doesn't affect its ability to block attacks. It will make a shield's secondary bash attack less effective, though. It is extremely useless for ammunition - crossbow and ballista bolts will simply glance off enemies, due to them weighing almost nothing. Since damage from falling is affected by the material of the landing zone, featherwood floors can cushion falls and prevent serious injuries. 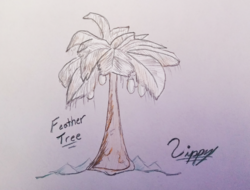