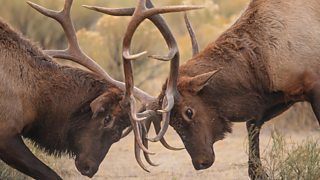 Natural weapons are innate attacks that can be used to hurt other creatures. They are distinct from manufactured weapons, which are items used (along with armor) by sentient creatures to improve their ability to attack and defend in combat. However, all creatures have natural weapons of some sort, some more deadly than others: arms can punch, horns can gore, talons can rip, fangs can bite, and hooves can smash heads in. Even creatures that you wouldn't expect to be able to put up a fight have default "push" attacks, which is simultaneously amusing and deadly in the case of the giant sponge. A description of the various types of natural weapons and their damage considerations follows.

Every creature has basic natural weapons, most commonly biting and kicking. The damage done by these attacks depends greatly on the mass and density of the body part attacking, the strength of the attacker, and the striking/kicking/biting skill of the attacker. These are basic attacks and work as you might expect: a lion is certainly more dangerous than a badger. Attacks in this category include but are not limited to; punching with fists, biting with teeth, goring with horns, scratching with nails/claws, and kicking with feet.

Some particularly dangerous creatures also have innate ranged attacks, usually some sort of "breath weapon". This might take the form of a dragon's fire, a magma crab's basalt-spewing, a giant cave spider's web-spraying, or a forgotten beast's poisonous spittle.

Natural attacks are far more deadly when there are syndromes attached. Giant desert scorpions are so incredibly dangerous not because they have big stingers (although that always helps) but because a single sting dooms anything organic it injects, be it a cat, a dwarf, or a dragon. Similarly, much of the danger in fighting forgotten beasts comes in their syndrome-causing attacks, including breath weapons, poisonous blood, area dusting, venomous bites, and so on. With the exception of some breath weapons, these attacks do not rely on size for damage calculation. What these attacks entail is covered extensively by the syndrome page.