A small rock-eating creature that lives in molten rock. It scurries on little feet and swims through liquid rock with sharp wings. It uses magma to digest rock and spits out burning globs.

A magma crab is a small magma-dwelling creature that has the unique ability to spit globs of liquid basalt in small quantities. It does so at a very fast rate when at range, but if confronted in close quarters, they can only defend themselves with a weak push attack. The basalt spit is a very small and incredibly hot glob of the stuff and as such only burns areas it hits, generally melting off the fat of that body part. It should be noted however that this can be exceptionally deadly, especially to smaller dwarves if they're struck multiple times, as they rapidly bleed until all the fat on the hit parts is melted away. Alternatively, the magma crab's spit may hit some cave moss and set it alight, causing a cavern-wide fire which is certainly deadly to dwarves.

Due to having few organs, magma crabs are quite resilient, but they can be killed relatively easily by just about any conventional means due to their small size, from cave-in traps and marksdwarves to having a mace- or hammerdwarf bash it enough times to crush its body. Using militia dwarves can potentially result in fatalities as dwarves are easily hit by the basalt spit, though soldiers with enough skill in shield use may come out unscathed. Overall, if you leave an open path from their home, magma crabs can be quite disrupting and dangerous, but any potential threat can be neutralized if you wall off any magma access before or after they appear, sealing them in and your dwarves out. Magma crabs cannot be butchered, so the only use of their corpses is filling your refuse stockpile.

Before 0.40, magma crabs used to spit solid basalt rather than liquid (this was a bug), and were therefore much more fun as they could easily break dwarves into pieces. Despite their description, they are not actually crab-like - they are essentially crawling heads with a pair of flightless wings, being devoid of legs or pincers which actual crabs possess, they actually more resemble hungry heads than crabs. Magma crabs possess a pet value of 200, but lack the necessary tokens to be trainable. Additionally, they can't be spawned in the object testing arena. 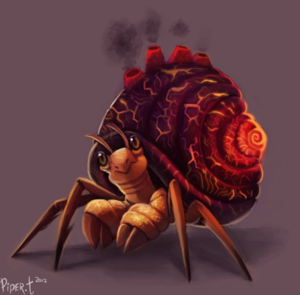