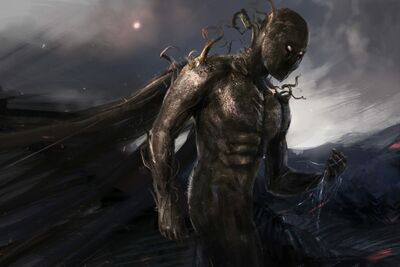 The Mountain Titan Ozosm has come! A great humanoid composed of native platinum. It has wings and it has a regal bearing. Beware its webs! (post)

Titans are large, monstrous, procedurally generated megabeasts that lurk in the surface world, pathing through to your fort and seeding destruction amongst your dwarves. They are the above-ground equivalent of forgotten beasts.

Titans are attracted by wealth and population size. Additionally, one may randomly appear when you reclaim a fortress. When a titan becomes visible onscreen, the game automatically pauses and displays a message.

Titans are procedurally randomized - being of any form, and made of any sort of material. Multiple titans may come to attack your fortress, each coming at different times. Most take the form of an animal, some not found in vanilla Dwarf Fortress, with extra features (e.g. extra eyes, feathers) or removed body parts (e.g. skinless cobras) and unusual colours. However, a titan can also take more generic forms, such as shelled blobs, quadrupeds, and humanoid golems. Materials range from flesh and blood, to flimsy things like ash and steam, to truly scary monsters of pure rock, gem, or metal. They may get a special attack, ranging from things such as venomous stings, poisoned blood, or explosive dust clouds, to flame breath.

If a titan has a venomous attack of some sort, it is randomly generated, as are the resulting symptoms, including, where applicable, the titan's breath attack. Venom attacks come in a variety of forms, from boiling ichor to trailing dust, and the effects can range from mild pain to complete and instantaneous necrosis or paralysis. Some forms of venom can spread from spatters and contact with your dwarves, eventually 'infecting' your entire fort - decontaminating your soldiers in shallow running water is one way to deal with this problem. Some titans breathe fire or shoot webs in lieu of any syndrome-bearing attacks. Web-shooters are immune to the effects of webs they, or any other creature, create and will shoot web even at targets they lack a proper path to. Titans based on spiders may be capable of shooting webs in addition to any other special abilities.

Unlike forgotten beasts, the number of titans in a world can be controlled if it is created through the advanced world generation screen. All are building destroyers, and are almost entirely immune to traps (they are [TRAPAVOID] and [NOSTUN] but non-webspinners will trigger a trap that has been webbed). They are also immune to pain, nausea and fear, and feel no exertion. Bridges are also less useful, as they cannot be raised or lowered as long as the beast is standing on (or under) them, preventing the traditional magma pit / dwarven atom smasher designs from working. Unlike forgotten beasts, titans possess unique titles depending on the biome they inhabit - titans living in marshes will be known as marsh titans, titans living in savannas may be known as savanna titans, etc.

The description of some titans are also affected by the alignment of the biome from which they come from, possibly most notable with the recorded examples of titans from good-aligned biomes having descriptions ending with "It emanates an aura of giving and kindness".

Unless the player has completely walled themselves out of the surface world, it is not possible to avoid confrontation with a titan when one spawns. Titans are not intelligent creatures and those made of "fleshy" materials can be butchered; due to their massive size, they will leave you with hundreds of meat and bone units and dozens of prepared organs. Titan shells may prove valuable during a strange mood, particularly on a map without other sources of shells. Unfortunately, all titans have a value multiplier of 1.

Some titans whose bodies are made of liquid, gas, fire, or powder will die or lose limbs on the first hit. Others are extremely difficult to kill due to being made of very hard materials or having an amorphous shape. When confronted with such near-invulnerable creatures the only option is usually to use your brain and try to lock it away somehow. Walls and raised draw bridges stop them. Since they are building destroyers, you can use installed furniture to lure them to a particular location. If you can put it in a pit, a clever trapmaker can feed it invaders. If a near-indestructible beast isn't in a position to threaten your dwarves, it can be used to train marksdwarves.

Due to arriving from the surface, cave-in traps may not be as efficient against a titan as they are against forgotten beasts unless the player deliberately allows them to enter the fortress. They'll be killed by dropping either natural or constructed walls or floors on them. It is also possible to capture some titans in cage traps by using giant cave spider webs (or similar). Titans possess a pet value of 2000, but they cannot be tamed due to lacking the necessary tokens.

You can prevent titans from appearing by editing d_init.txt to change [INVADERS:YES] to [INVADERS:NO], though that will also prevent ambushes and sieges, or through setting the number of titans generated to 0 in advanced world generation 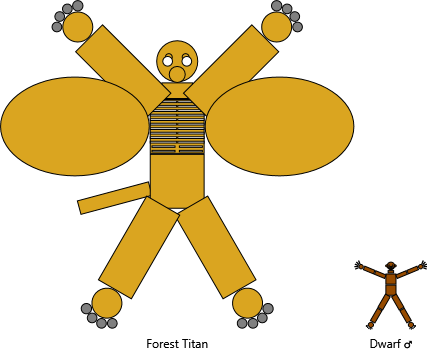 Estimated size comparison between a titan and a dwarf.

Titans pose different levels of threat to your fortress, based on their composition, body shape, movements or special attacks. This list also works with forgotten beasts and demons.

Titans can be put to various uses if correctly managed. See here for more information.

Titans can be encountered in adventure mode and are considered "beasts" for the purposes of asking about troubles. They are common targets for quests and reside in shrines.

Titans are relatively easy to defeat in adventure mode, at least as far as they won't be made of too hard material or possess devastating special attack. Though they are gigantic, they have two major weaknesses: they are unintelligent, and so cannot train skill in combat; and they live in shrines, surrounded by pillars, which make excellent cover for a stealthed adventurer. It is therefore quite possible to sneak up behind a titan and slay it, without it ever noticing that you're there as long as you attack hard enough. Do note that all titans possess legendary skill in observer.

This strategy should not be attempted on titans which are naturally without eyes, or which possess a hunger for warm blood, as these have omnidirectional [EXTRAVISION].