Dwarves in strange moods will create legendary artifacts: unique, "named" items which are of unsurpassable quality (and often, value as well). An artifact is the ultimate expression of a dwarf's desires, fears, memories and hopes in art-form, and each dwarf will produce at most one in their lives (or die trying). Dwarves that create an artifact immediately gain enough experience to boost them to legendary level in the affected skill, unless they were possessed.

Dwarves drop artifacts in the workshop as soon as they are made. They can be traded, just like any item of their type, or stolen, sold or warred over, and may transfer between civilizations in those ways. A list of all artifacts in the fortress can be seen by pressing L (l in version 0.40). 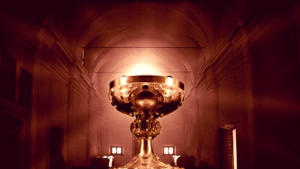 The holy grail, one of the most well-known, symbolic artifacts in the world. Unfortunately not made by dwarves. On the other hand...

Artifacts are normally of extremely high value and quality, and can be used just like normal items of their type; they're therefore extremely useful in any situation where value or quality are important. Note that material and weight calculations still apply, so an artifact sword made of dingo bone, or an artifact breastplate made of gold, are not going to be overwhelmingly powerful.

Artifact furniture of high value can be placed in rooms to greatly increase the room's value (and hence quality), which can be useful to meet the room quality requirements of nobles. They can also be placed in high-traffic areas of the fort, so that dwarves that pass by (or over) them will get happy thoughts from admiring them. Artifact mechanisms can be turned into levers and traps, which count as furniture.

Artifact cages and animal traps are unique, in that they are capable of containing any type of vermin creature without them ever escaping - by comparison, certain types of vermin can gnaw, fly, or immolate their way out of ordinary cages depending on their materials.

Under the rumour system, artifacts created in your fortress can also become known to foreign sites and civilisations. Some of their historical figures may then lay claim to your artifacts, and plot to steal them.

The artifacts' creation history and storage locations are recorded during world generation and can be discovered in Legends mode. Artifact scepters may become symbols of various rulers.

Artifacts cannot be designated for Dumping or Melting.

After creation, an artifact cannot be further decorated (by encrusting it with gems, studding it with metal, or sewing images into it). A pitiful gabbro scepter, for instance, cannot be made more valuable.

Artifacts disappear from the artifact list upon abandoning a fortress. Artifact creation has a wider selection of possible item types for several skills, occasionally resulting in artifact items that could not be made normally, like bone shields or metal beds.