A windmill is a machine component that provides power via wind on the surface of a fortress map. In order for the windmill to generate power, its center tile must have the "outside" attribute. The power produced by each windmill depends on the latitude at which your fortress is located within the world. If a windmill built on solid ground does not generate any power, then you simply don't have enough wind on your map and will never be able to use windmills. The power generated by a windmill is transmitted downward through its center tile, so you must channel out the central tile and build the windmill on top of an existing vertical axle or gear assembly (or the actual machine you wish to power). As the center tile of the windmill has an implied floor, this does not permit passage as long as the windmill stands.

When building a windmill on top of an existing axle or assembly, you might get a "no access" message even if your dwarves can reach the center space of the windmill. You'll need to build a floor so that there's a place to stand adjacent to one of the nine windmill squares (i.e. one space between the standing platform and the windmill axle). Spaces adjacent to the windmill's axle (i.e. within the 3x3 building area) aren't sufficient for construction access.

Due to what is assumed to be a bug, it is sometimes possible for windmills to transmit their power through a solid floor without channeling. They only have this effect if the windmill is built first, and whatever it's powering second; however, this does not always work reliably.

As with other machines, windmills freeze if the floor under them is natural ice. 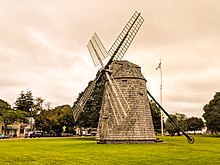 Windmills can be synchronized using the method described here.