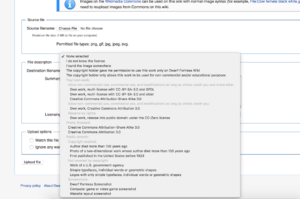 The message at the bottom of the df wiki says that all content is available under GFDL & MIT. I wonder if that is really true.

This copyright page showed up in 2010. I don't know when the warning below the edit box appeared. So what is the status of older contributions?

The status of images uploaded here is also in question, since the file upload screen allows all kinds of licensing options. This particular screenshot is licensed as "Found the image somewhere." Basically everything in the tileset repo lacks detailed licensing information. Despite that, people claim that they are public domain and safe to use in video game development.

This current notice dates from 2010, but it is likely that other notices were present prior to that--copyright concerns on wiki content has been a known issue since before Wikipedia launched in 2001. Even without obvious copyright notices, contributions to a wiki can reasonably be expected to be unencumbered. But debating wiki copyrights is a rather pointless academic exercise unless and until somebody actually has a complaint. If somebody were to complain, it would be fairly straight-forward to remedy the situation by removing content as necessary to comply with law.

The variety of image-licensing options is a rather new addition--and most are quite reasonable for use on the wiki. The "Found somewhere" option is likely intended to catch (and initiate review of) questionable images, instead of forcing users to hide them under other licenses. Images which violate or appear to violate copyright are removed.

I would suggest that the bottom-of-page copyright notice be amended to state "Content is available under GFDL & MIT unless otherwise stated." to reflect images may have different licensing.--Loci (talk) 21:59, 9 December 2018 (UTC)

The thing that brought this on is that I saw the tileset repo recommended as a resource for people developing roguelikes. Is there an expectation that anything someone finds on the wiki will be legally unencumbered? Should there be? VengefulDonut (talk) 22:42, 9 December 2018 (UTC)

"The idea that typefaces (rather than fonts, which are computer software) cannot be copyrighted in the United States is black letter law. 37 C.F.R. § 202.1(e). Under U.S. law, typefaces and their letter forms or glyphs are considered utilitarian objects whose public utility outweighs any private interest in protecting their creative elements."[1] So it would appear tilesets are fair game (under U.S. law) regardless of the wiki's stance on copyright.

Toward your more general questions, I would say there is a definite presumption that all the text on the wiki is available under the GFDL. Images are another matter (which is why we have a license-selector box on the upload page). If anyone is particularly concerned about their images being used, they would be well-served by ensuring that their files' licensing information is set correctly.--Loci (talk) 00:41, 10 December 2018 (UTC)

That sounds promising. So apparently a "font" can be copyrighted, but a "typeface" can't. What? Is a tileset a typeface, or is it a font? Wikipedia suggests that "typeface" is a synonym for "font family," which is another term to chase.
This provides the following definitions for the terms:

First, let's distinguish between a font and a typeface. A typeface is
the scheme of letterforms (which is really what you're probably talking
about), and the font is the computer file or program (or for that matter,
a chunk of metal) which physically embodies the typeface.

A tileset is definitely a computer file. Which I guess makes it a copyrightable font? It later goes on to say that bitmapped fonts are not copyrightable, which would make our tilesets probably fine. This is getting kind of subtle. VengefulDonut (talk) 04:04, 10 December 2018 (UTC)

Your same wikipedia article has a reference to a copyright office notice which talks about "digital typefonts" also being immune to copyright, but defines them as "a bitmapped digital representation of an actual analog typeface design." This doesn't seem to be saying all bitmaps are fine.
I want to conclude that someone trying to reuse these for their own software should talk to a lawyer about it rather than hoping it works out.VengefulDonut (talk) 04:30, 10 December 2018 (UTC)

I also saw something like that in the wikipedia article. I'd go down another rabbit hole chasing down whether "is it computer code?" is the real legal standard and whether bitmap images can qualify as "computer code," but I think it has become pretty clear that this area is complicated enough to need an expert opinion, and neither of us is an expert :) VengefulDonut (talk) 01:14, 12 December 2018 (UTC)