A deity is a supernatural being or force of nature in the mythology of a world. Deities are randomly generated during worldgen, along with their corresponding divine metal and assigned different spheres (the objects, creatures, concepts, etc. they are associated with). Religious creatures may worship one or more deities.

Worship and deities differ among races: Dwarves and humans worship multiple deities, most of which are often depicted as being of their own race, though, on occasion, they may worship a deity that is depicted as an animal or vermin. An elf does not worship a deity, but believes in a particular force amongst multiple such that permeate the forests.

It is highly likely that deities are the entities responsible for possessing dwarves, causing certain types of strange moods.

Each dwarf, and many other creatures ([INTELLIGENT]/[CAN_LEARN+CAN_SPEAK] at least, such was presumably the intent), have one or more deities listed among their relationships. Almost all dwarves believe in at least one deity...most believe in two, and some three. In the case of your dwarves, you can see the degree of belief they profess ("faithful worshipper", "casual worshipper", etc.).

Fortress mode includes temples that can be dedicated to individual deities. Dwarven deities are also represented in statues, engravings and figurines. 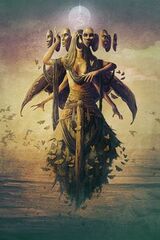 Example of a trippy-looking god.

Adventurers can select a deity or religion to follow during character creation, and choosing for them to be more than a casual worshipper will add the need to pray, which can be satisfied by talking to them. There is currently no way to add a followed deity, religion, or prayer need to an adventurer during play (other than DFHack). In adventurer mode, sites such as monasteries, fortresses, and human towns may contain temples of various designs possibly inhabited by priests dedicated to a deity - if a worshipper of that deity were to desecrate a statue at that temple there may be consequences. Shrines may also be found at those and other types of sites where dice can be found, which can be rolled to maybe gain a boon or curse.

Deities occasionally influence events during world generation. Gods of death can create slabs, from which necromancers learn the secrets of life and death. Furthermore, civilized creatures that profane a temple of the deity they worship incur the wrath of their former patron, being turned into a vampire or werebeast as punishment (even though being immortal is not really a punishment to some).

Deities may occasionally collaborate with a demon, raising it up from the underworld with a ritual conducted by an artifact slab. This is, in fact, exactly how said demons escape the Underworld and gain status in the mortal world. What demon in question is summoned, as well as the reason for this, appears to be linked to the god's particular sphere. For example, gods of death may summon demons "that more may die"; war-gods conduct the ritual "that war may rage forever" or "that great fortresses be raised and tested in siege". Gods of bravery and valor, meanwhile, do the same "that great acts of heroism may be performed." (Admittedly, anyone who can navigate a demonic site and come out alive should rightfully be called more than a great hero!)

Deities are served by angels, randomized creatures who may wield equipment made of impossibly strong divine metal created by the deity. Angels are best known for guarding the contents of vaults, the treasure-houses of allied demons; they may be the most exceedingly powerful and dangerous creatures in Dwarf Fortress, more so than even demons. Successfully raiding a vault is a feat on par with conquering the Underworld—you may use the knowledge on the vault's slab all you want, but it's a tiny reward compared to vanquishing the forces of Heaven itself.

Deities can be removed from the game through modding entity raws, by making all civilizations become areligious. In such a world, demonic leaders thrust the spire of slade by themselves, and place the slab in a vault created on their own. The vault is then left unguarded, since no angels can exist without deities.

Removing deities makes vampires, werebeasts, and necromancers never spawn, as these can (currently) only be created through divine intervention.

Physically summoning deities into the world[edit]

Deities don't usually manifest themselves physically in vanilla DF, but they can be helped with a DFHack script. The script doesn't just create a unit that 'looks' like the deity, it actually pulls the historical figure info from the deity and creates a nemesis record to link it to the newly created unit. Use with caution.