Enemies in sieges will often arrive riding on other creatures, their mounts. These mounts can not only add to the attacks of those mounted on them, but may also give their riders more abilities: their mounts might be able to fly or swim, be building destroyers, prevent the operation of bridges, be faster and fleeter of foot, or just be plain scary in combat. 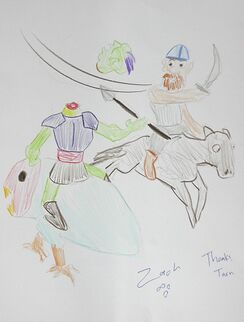 Enemy squads can appear with a single mount for the squad captain, or individual mounts for each member of the squad (potentially including more than one species of mount). Some mounts such as giant bats or giant cave swallows possess the ability to fly, pathing over whatever walls and traps you have set up for them. This can lead to a great deal of fun if you do not have sufficient marksdwarves to deal with them. Some siegers also come on amphibious mounts, such as cave crocodiles and giant toads. Humorously, these units will disregard their rider's inability to breathe underwater or swim, and reports of amphibious mounts pathing into moats or rivers, only to have their goblin riders drown, are fairly common.Bug:926

Beyond acting like a force multiplier, dead mounts can be butchered after the battle to feed your meat industry. A squad of cave dragons that is killed and hauled back inside your fort will produce a lot of meat products, making mounted sieges convenient food resupplies if you are prepared to handle them, that is. Note that goblins only have a single animal trainer, their general; if he falls (or, because of a bug, leaves the map), you will never see mounted goblin units again.

Note that in the vanilla game, playable civs cannot, under any circumstances, field cavalry in fortress mode; this is regardless of race, not just dwarves.

It is possible for adventurers and their companions to make use of mounts, which may be taken in character generation or acquired over the course of the game. To climb onto (or off of) a mount press h while standing next to it. You can also jump off a mount or dismount with the dodge option in the Aim attack menu. (Unfortunately, the speed the mount is travelling does not increase the distance you can jump, unlike when you are sprinting on foot.)

You can also lead a mount as an option in the hold menu. This is useful for moving through doors, since you can't open doors while mounted (unless, perhaps, your mount has that ability).

You can also pack items onto, or get an item packed on a mount, when mounted or next to them. This can be useful for carrying provisions for long journeys, or returning with heavy trophies, treasures, or goods.

Mounts are listed on the companions list with their location relative to you. See Adventurer mode gameplay#Companions for details.

With x-a you can pet your mounts (and indeed any animal, including undead ones, although the latter is generally not advised). This may give your character a happy thought, but does not appear to have any effect on the animal. Not all creatures you can play as adventurers have the Pet animal ability.

A mount can be quite advantageous, as animals that are appropriate as mounts are generally very large, and therefore quite dangerous in combat. They also allow you to travel faster, and may also allow you to outrun enemies that would otherwise be impossible to catch (or escape from.) You can change your mount's speed in the Speed and stealth menu while mounted. Mounted creatures still have minds of their own, however, and may panic and run away, (or decide to attack) at inopportune times. The Rider skill seems to affect how likely this is to happen, but further verification is required.

You can adopt any stray mount found loitering around civilized sites, simply by mounting it. The only known way to mount a non-tamed non-stray creature is to first become a necromancer, kill the creature, and raise it as your undead slave. Both dragons and rocs can be ridden this way. Only necromancer adventurers may ride undead mounts.

Interestingly, pets aren't part of a civilization and have no civ ID, the only historical figure link they get is that the adventurer is their owner. On the other hand the adventurer doesn't have a corresponding link to the pet, so if a member of your party asks another member about their pet, they will answer that they don't know anything about them.

Ambusher skill doesn't level up while sneaking on a mount, instead it trains up the mount's skills (assuming they CAN_LEARN).

Mounts can give birth in adventure mode, sometimes in the midst of battle.