If you are looking for the symbols that flash over a dwarf icon, see status icon.

This bar shows some status information about your fortress and its residents.

The fortress name in both the Dwarven language and English, and the classification of the fortress within your civilization. Hovering the mouse pointer over this reveals a tooltip showing the fortress' wealth; this requires a broker with appraisal and is affected by bookkeeping accuracy. 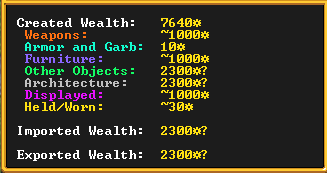 A hypothetical example: You buy (rope reed cloth) worth 50. This increases imports by 50. You then make this into a rope reed bag worth 100. This reduces imports by 50 (since it is no longer considered by the game to be foreign-made). Created wealth increases by 100. You then export this bag. Created wealth decreases by 100, and exports increase by 100.

The total population and how many are at each of seven various stress levels. To see who is at which level, the units window can be sorted by stress.

Opens the Stocks windows, also has the keyboard shortcut k.

This section may not display as many categories depending on the game display resolution and UI scaling settings.

The total amount of food, drink, seeds, meat, fish, plant, and other items in your fortress. These all may have question marks until you have a bookkeeper with the record keeper skill. Depending on how many items there are, and how precise you request the counts, you will get more accurate numbers. Note that the bookkeeper will need an office to take inventory, and it will take some time. Also note that the 'Other' class includes immediately edible items (e.g. prepared meals, cheese), potentially edible items (e.g. flour, syrup), and inedible items (e.g. dye), and is therefore an unreliable indicator of a fortress' food stores.

The current weather or moon phase, calendar date, season, and world year. The tooltip listing what is in the tile the mouse pointer is at is displayed below here.

The following section of the article is or may be currently out of date. Please update it.

Every thing after this needs to be moved to the proper pages.

The Objects status screen contains four tabs (Artifacts, Symbols, Named objects, and Written content), each of which is a list of special, named, or unique items.

Each list entry contains the following columns (from left to right):

Symbols are items given to nobles in the Nobles and administrators screen. They may be artifacts, or they may be other items, but will always be named (giving a noble a symbol includes naming the item if not already named).

Written content never has a claimant, so the last column will be empty. Typically, the work's translated name will be the same as its original name, with a few exceptions. The list will only include original works, not copies. While the majority of written content will be scrolls and quires/codices, other objects, such as slabs containing the secrets of life and death can be included.

The Open cases tab has a list of the open cases on the left from oldest to most recent. On the right, details about the selected case are provided, including the injured party (if applicable), the case status (Unsolved.), and the witnesses who reported the crime. There are two buttons which allow the player to interrogate or convict a creature.

The Closed cases tab, similarly the Open cases tab, has a list of the closed cases on the left from oldest to most recent, with details on the right. However, there are no buttons, and the case status is described as Convicted: Urist McDidntMakeFlutes, Craftsdwarf.

The Cold cases Tab is the same as the Open cases tab, but only includes cases older than one year.

The Fortress guard tab contains information on the fortress guard if it exists. At the top is shown the total number of combined cages plus restraints in the dungeon out of the number requested by the fortress guard (approximately one tenth the population). Note that chains includes both ropes and chains.

The rest of the tab is a list of members of the fortress guard, including the cases assigned to each member.

The Convicts tab contains of a list on the left of everybody who has been convicted of a crime. On the right, pending sentence(s) for the selected creature are displayed, along with all the crimes they have ever been convicted of.