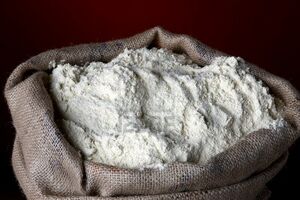 A jute bag filled with flour.

Flour is an ingredient in cooking, made by milling one of the many available grains at a millstone or quern. Milling involves grinding the grains beneath the wheel, rendering it from an inedible plant to an edible powder suitable for cooking. Milling plants needs one bag for every job, and one plant will be processed to make one bag of flour. Flour in bags or mill barrels do not wither like crops, and possess an indefinite shelf-life if kept free of vermin. It is also a very efficient use of space, since a single barrel can store up to ten bags of flour. Given these attributes, flour serves as an excellent foodstuff. A relatively small stockpile can sustain a number of dwarves during a siege or the first few months of a new outpost.

Flour that is stored in a bag is not recognized by the manager's work order conditions, unless it's given the trait 'cookable'. If the trait is not added to the item specification, the item count will always be handled as if it was 0 (meaning that all comparisons <X will be true, resulting in unlimited production). Example: If you want your Kaniwa flour stockpile to be 50 at all times, you need to add the following conditions to the work order: [a]dd item condition, [i]tem type powder, [m]aterial Kaniwa flour, [t]rait cookable, [n]umber 50.

Flour will be used in the kitchen when 'prepare meal' tasks are queued if it is enabled in the Kitchen tab in the Status screen. Flour is more valuable than a raw mill-able crop, meaning prepared meals made with flour will have a higher value. Bags and barrels of flour are often quite valuable and suitable for export or import with caravans; a single barrel of flour can easily be worth more than 200☼. Typically, a stack of 2 plants will be ground to produce a single bag with 2 flour and 2 seeds.

Since meals have a quality modifier, they can be very valuable; a skilled cook can consistently produce masterwork meals. Combine this will the higher value of flour as an ingredient, and you have a recipe for financial success. Literally.

If you end up selling flour-based meals for trade, just make sure not to interrupt your own food supply. It's important to keep enough flour/dwarven wheat around for food and alcohol for your own people.

The following crops can be made into flour:

Flax and hemp are unique among flour-producing plants in that they also produce plant fiber; that is, it is possible to make both the flour and the containers that hold it from one plant.

Dwarven science continues to research improvements in the milling process. Dwarven histories give many examples of new and innovative quern and millstone designs, few of which are reproducible on an industrial scale, as well as elaborate mechanical schemes. Research dwarves continue to predict that the next major advance in flour technology will be a new, advanced foodstuff known as "bread" – some sort of solid beer – but they have been promising to produce this miracle substance for years and have not yet shown any progress.

No self-respecting dwarf (even when motivated by starvation) will lower themselves to eating what promised to be perfectly good beer. Many cunning chefs in the mountainhomes have, however, been known to serve a meal made entirely of the stuff to both haulers and nobles alike, claiming it to be "masterfully ground" cave wheat. Elven and human traders are similarly duped much to the pleasure of the kitchen staff.

The few human traders to make any comparison between cave wheat flour biscuits and the nigh-legendary solid beer found themselves suffering from terrible, sudden misfortune.

Also, on the topic of humans, some may be seen expressing joy over minced flour meals, apparently believing it to be another form of solid alcohol.