An office (called a study in some game menus) is a zone required by certain nobles and administrators. Some higher-ranking nobles require a "throne room" - the same thing, just fancier. You can simply designate an office from the zone menu. An office requires a throne or chair and does not (necessarily) have to be a separate enclosed space separated from other areas by walls and a door.

Note that if you assign an office to a dwarf, sometimes they will eat a meal in their office and complain about the lack of tables - to avoid this thought, put a table next to the chair in said office.

A "meager office" can consist of a 1-tile-diameter area designated from a single chair as a study/office, and assigned to a particular dwarf. You will probably first encounter this need in the bookkeeper or the manager - assigning one of the chairs in the dining room for them is perfectly acceptable.

If you put a table next to the office chair and designate it as a dining room as well, both rooms will be used like they are supposed to - however, overlapping rooms drop considerably in value rating, making it harder to meet demands by higher-ranking nobles. While this can be countered with high-value furniture (artifacts are very helpful), actual individual areas, designated separately from other areas (whether or not separated by walls) are the easier way to meet demands. 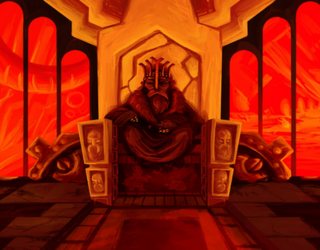 Still isn't satisfied until that golden armor stand is put in.
Art by Fault
Retrieved from "https://dwarffortresswiki.org/index.php?title=Office&oldid=279798"
Categories:
Hidden category: