Wear is the degradation of certain items' materials over time. Clothing will slowly wear out when being used, subject to damage, or through natural decay. Using equipment, such as weapons and armor, can wear them down. Wear alters the value of an item, and it eventually will be destroyed. Additionally, animal-based products can rot, which is different from wear (see miasma), while crops and harvested plants can wither if not stored in a stockpile, making them useless but generating no miasma (see farming).

Wear will alter the value of an item, and is denoted by the symbols x, X and XX. For example, over time a dwarf's "Pig tail shirt" will degrade into a "xPig tail shirtx", a "XPig tail shirtX" and eventually a "XXPig tail shirtXX" before disappearing entirely. Every 806400 "points" of wear will increase the item's damage level one step (i.e. "item" -> "xitemx" -> "XitemX" -> "XXitemXX" -> destroyed). If you sell worn clothes to caravans early enough, they are still worth good money:

Armor and weapons can also suffer wear as a result of combat v0.43.04. For weapons, the chances of suffering wear depend on the material properties of the body tissues or armor encountered during an attack, while armor suffers wear depending on the material properties of the body part/weapon hitting it. The chance depends on their relative fracture, yield, and possibly strain-at-yield, impact or shear depending on the type of attack. For example, a leather helm will rapidly deteriorate if you let its wearer suffer a few dog bites, while bone or shell helms will degrade much slower (being equivalent to tooth in shear values). 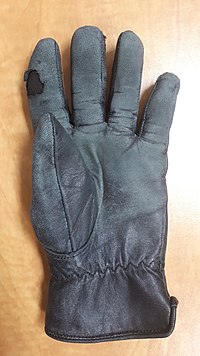 Even if a piece of clothing has been worn down to the point that any self-respecting dwarf would disdain to wear it, it still has value and can be sold back to humans. This seems especially true for xTrousersx that have holes around the knee section, or have been exposed to acids. These particularly worn trousers are highly prized by short-sighted human adolescents and are resold in human markets as ☼Masterwork☼ trousers at exorbitant prices. Additionally, xGlovesx whose fingers have worn off are similarly prized. Humans call them "Fingerless Gloves", though it is unknown how a human without fingers would wear such a glove.