A hatch cover (also called a floor hatch or just hatch) is, in effect, a door, but controlling the passage between Z-levels instead of along the same Z-level. They can be placed over stairs or ramps, or open space as long as they are supported by an adjacent floor tile.

Like doors, they can be linked with mechanisms, or locked, or kept tightly closed to keep out water, pets and foes alike. They can be set as internal, but as rooms cannot occupy multiple Z-levels, this has no effect.

When closed, hatches appear as ¢; they are not visible when open. A hatch cover's color is determined by the material it is made from.

As building destroyers can only destroy buildings on other z-levels under certain conditions, hatch covers can be quite effective at keeping out enemies if used properly.

They can be constructed from a Stoneworker's workshop, Metalsmith's forge, Carpenter's workshop, or Glass furnace from stone, metal, wood, or glass respectively. Once built, they may be placed with b-p-h.

Hatch covers are common building elements in generated dungeons, lairs, and other structures. When placed above stairs, adventurers can use the ordinary stair-climbing commands < and > to traverse them. On the other hand, when placed above ramps—as is typical of lairs and towers in keeps and dark pits—the player must instead use Alt-direction while standing adjacent to or directly under a hatch cover in order to pass through it. (Alternately, Ctrl-direction and Shift-direction may be used when above or below a hatch cover, respectively, as well.) 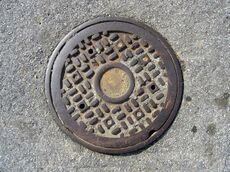