A bronze door, decorated with gold.

Doors are pieces of furniture used mainly to control the movement of dwarves, pets, and liquids, and to define the exits of rooms. A door must be built next to a wall or other form of support*. Doors appear using different graphical tiles depending on their material.

(* Note that a tile of tree roots is not adequate for this purpose.)

It is important to have many doors, but don't get carried away.

A door has three main settings:

(Note: This does not "Forbid" the door itself in the usual sense. It only "forbids passage" - an unfortunate choice of words, perhaps, but hopefully not too confusing. Just think of lock/unlock and you'll be fine.)

Doors also halt the movement of liquids (water and magma) in the manner of floodgates, and can be used in the same ways if a passageway is narrow enough. The main differences between a door and a floodgate for fluid containment are:

Animals only try to path through doors/hatches improperly when they are unlocked and tightly sealed (the latter specifically meaning "animals cannot open"), so a mechanism-controlled door/hatch is also identical to a floodgate from a pathfinding perspective.

Most wild animals do not have [CANOPENDOORS], so they can't open doors at all - presumably, Tame creatures are explicitly granted the ability to open pet-passable doors in your fortress. 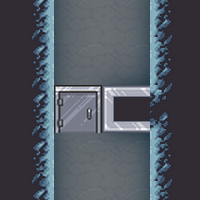 The placement requirement for a door is that it must be positioned cardinally adjacent to a wall at the time of placement designation. That wall does not need to exist when the door is being constructed, nor does that wall need to exist for the door to continue to exist after it has been constructed. Thinking on this, one might discover that doors can be placed side by side in continuous strings, given a little extra effort.

You will normally begin the process by anchoring your first door placement designation against a constructed wall -- not a natural stone wall. Immediately afterwards, you can use the designations menu to nRemove constructions to clear a space for the next door. Once the space is clear, you can designate the construction of a second door, even before the first door has been constructed. Repeat the process for your third, fourth, fifth, etc. door until you are satisfied. You can continue the process indefinitely as long as you possess doors and constructed walls to anchor your placement designations. Note that natural stone walls do not work this way; digging out a natural wall will deconstruct any adjacent no-longer-supported doors.

You can also use this strategy to unhook doors from walls and leave them as free standing structures. Why you would want to do this is up to you, but some players may find this useful for baiting building destroyers away from their fortress.