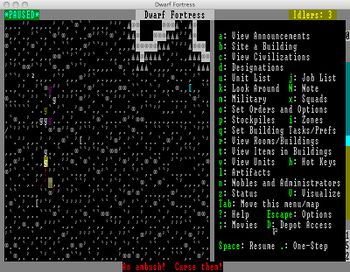 An ambush is a type of attack in fortress mode where a small force of enemy humanoids, typically goblins, attempts a sneak attack on your fortress. While smaller in scope than a full siege, ambushes are not related to the number of dwarves in your fortress, and so can be triggered by relatively small populations.

Ambushes are not announced immediately, and the attacking units are only revealed when your fortress becomes aware of the attackers, either when they set off a cage trap or come sufficiently close to a dwarf, caravan member, or pet (they ignore wildlife). Ambushes can also be discovered manually, but not spotted, if you happen upon on an invader corpse and some goblinite in one of your traps. Once an ambush squad is detected, an ambush will generate a major announcement, the wording of which depends on the invader.

Ambushes, just like sieges, nearly always happen at the end of a season, generally in the last 10-15 days of the season. Ambushes tend to arrive with caravans but can happen any time. Note that goblins will usually ambush with more than one squad (2 to 4), each of which will trigger a separate message and also has to be detected separately. If ambushers are caught in cage traps, they will be marked as Caged Prisoner in the unit screen. These prisoners can be dragged around between cages (or tossed over tall towers) without risk of a jailbreak, unlike goblin thieves. If you abandon your fortress while an ambush is active, you will receive the message "Your strength has been broken." Finally, when the leader of an ambush is killed (or captured), but not the other units, they will stand around and "wait" for their leader; this is probably a bug.

If you manage to sufficiently anger an elven civilization by offering their traders wood-based items or by killing them off entirely, you may front an elven ambush, announced with the message "An ambush! Curse all friends of nature!". Elven ambushes are also possible if your civilization is enemies with the elves, which occasionally happens. Elven ambushes are similar to goblin ones, except that non-ranged elven warriors are laughable fighters. Elven archers, however, are a different story...

Necromancers will also occasionally ambush your fortress, if you are in range of their tower and they opt out of a full-on siege. Necromancer ambushes consist of several necromancers, each one being detected individually; an early warning sign for a necromancer ambush is the presence of undead in non-evil biomes. These ambushes are announced with "An ambush! Drive them out!". The necromancers themselves are harmless, being regular old unarmed humanoids; however, very bad things will happen if they manage to find their way within sight of any left-over goblin sieges, corpse or refuse stockpiles, or (Armok forbid) last month's dragon invader. For this reason it is highly recommended that fortresses within sounding range of a tower internalize or atom smash all of their meat byproducts, and set standing orders to "gather refuse from outside" and clean up any meaty outdoor bits.

Kobold ambushes are triggered by a long enough string of successful kobold thieveries, and are announced with the message "An ambush! Skulking Vermin!". This usually only happens when kobold thieves manage to steal from an outdoor cache of some sort that your dwarves cannot access for some reason, possibly fallen goblinite from or during an ongoing siege. Kobold ambushes are mostly notable for being much more annoying than kobold thieves, and should not be allowed to occur.

Ambushes also occur often in Adventure Mode. They generally happens while fast traveling, you will suddenly stop fast traveling and a dialogue box will appear, telling you who you're being attacked by. You will then be attacked by a group of hostile creatures. They are almost always Humans, Goblins or Dwarves and their equipment varies widely from armour and iron melee weapons to clothing and bows. They will generally surround you and will not stop fighting until they - or you - are dead.

The best way to deal with ambushers is to attack each enemy until they suffer a bone fracture. This will almost always render them unconscious after a turn or two making them a non factor and prevents them running away. While they are down, focus on their friends.

Archers are by far the biggest threat in an ambush as a bolt has a high chance of striking a bone and rendering you unconscious to be killed in short order. Bowmen and crossbowmen are green colored (unless using a graphics set), so watch out for any green enemies and try to focus on them first if possible. If you are shot at, try to move behind a tree to hide from the archer until the arrows stop flying. Allow the melee attackers to come to you and slice them up as they come close enough. Beware of accidentally dodging into the tree, stunning yourself, or out of your cover.

If you succeed in killing them, you can then run away, keeping trees between you and the archer as much as possible or try to charge them to cut them down in melee. It is a good idea to carry a bow of some kind, even if you are a melee fighter so you can fire back at archers if necessary. All you need to do is nail one of his bones with a projectile and he will probably fall unconscious, ready to have his head sliced open.

Once you have wiped out most of the attackers, feel free to kill crippled ones slowly, cutting or beating them up first to boost your skills. Make sure to check their inventory once they die, you might find some nice armour.