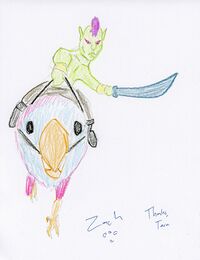 Goblins will start harassing a fortress early in its life, first with babysnatchers, and later with sieges. Goblin babysnatchers carry a bag for their purpose. Their soldiers are commonly armored with copper and iron armor, and armed with copper, iron and silver weapons, generally with no quality levels unless on weaponmasters, and also typically accompanied by other creatures, such as other humanoids they have successfully kidnapped, trolls and beak dog mounts. Their items can be a valuable source of metals for fortresses that embarked in metal-scarce areas (leading some players to refer to the plunder from a defeated goblin attack as goblinite). Defeating a majority of an attacking force usually sends the rest of them running.

Goblins are immortal beings, dying only to violence and disease. For spoiler reasons, they never need to eat or drink, despite being carnivorous. 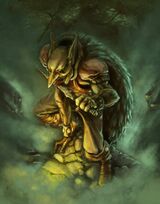 Goblin civilizations are created when a particular kind of uniquely powerful demon escapes the Underworld. Such demons remain in charge until they're killed or otherwise defeated, in which case normal goblins will take their place. This could imply the reason behind their particular (lack of) ethics. Goblin civilizations in fact require these demons to appear in worldgen - should you use advanced world generation to forbid demons in your world, the goblins will be locked away in the Underworld in their place, and will remain there until they are freed by a civilization digging too deep and too greedily.

Despite their bloodthirsty, selfish, unsympathetic and cruel nature, goblins are also recognized as a benevolent and merciful race in some aspects. Goblin Baby-Snatchers claim moral superiority by rescuing innocent lives from the slavery of making rock trumpets until they are eaten by a giant cave spider. Atrocities such as the so-called dwarven day care institution also spur snatchers to rescue the children from constant abuse. Goblin sieges are considered to be a form of mass mercy-killings, as a fort can die in the most horrific of ways, such as social disagreements, an infestation of parasitic organisms (some masquerading as dwarves) or worst of all: a visit from the circus. And goblins who are friendly towards dwarves have been observed after de-transforming from a werebeast.

By modding, however, Goblins can also be played in fortress mode as well.