Lack of variety causes bad thoughts, but will never cause a dwarf to stop drinking. Even after years of drinking a booze they don't like, a dwarf will never prefer water or dying of thirst to drinking the same old booze. You can therefore keep a fortress alive on only one type of booze so long as you have enough good thoughts to offset the bad thought from lack of booze variety.[Verify]

Dwarves get happy thoughts from drinking. The intensity of this buzz depends on whether it matches the dwarf's personal preferences. It is unknown whether high-value liquors (like sunshine) boost feelings more than low-value ones (like gutter cruor)[Verify]. We do know that dwarves prefer to drink them. Dwarves also prefer a variety of alcohols to choose from, and they will get unhappy thoughts from drinking the same old booze every day.

This is a complete chart showing possible plant uses 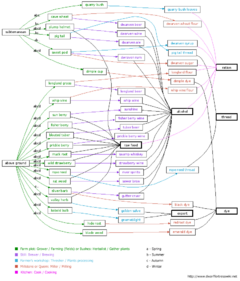