The catsplosion is a mighty force of nature and a serious concern at the Mountainhome. Much like the captain of a popular starship and his Trouble with Tribbles, dwarves fall prey to the fecund habits of the furry, lovable creatures known as furiously fornicating fantastically fecund felines cats. 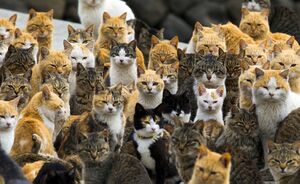 Anyone know a talented butcher?

A conventional catsplosion is an uncontrolled overpopulation of cats.

Conventional catsplosions are an insidious poison which operate by using a lethal psychological attack known as "Cuddly Wuddly Syndrome". Dwarves, ordinarily content to manage an overpopulation of cats by employing butchers, tanners, soapers, leatherworkers, bone carvers, and cooks, may suddenly find themselves appropriated by a cat who employs mind control waves in order to take the dwarf hostage. The dwarf, now considering the cat its pet (when in fact the opposite is true), is no longer able to butcher the cat and will absolutely not tolerate anyone butchering his "bewuv'ed cuddlebug". Through this psychological technique, an insurgent is thereby successfully implanted into the fortress.

Over time, the number of insurgents grows so large that the dwarves must respond with open violence to protect their homes and (other) loved ones. Magma, water, and bridges are considered particularly effective countermeasures. Sadly, this results in significant unhappy thoughts and even open tantrums due to dwarves losing their "pets".

A gelder is all it takes to take care of a catsplosion these days - simply assign male cats for gelding and they will never breed again.

The instructions below are only useful if the player deliberately refuses to go for the easy way out.

Do not leave stray cats wandering around or they will surely appropriate one of your citizens as a pet. Before your cat population gets out of control, quickly build a cage and assign all stray cats to it. If you do want some cat breeding in the long run, just leave a breeding pair outside and they will sooner or later become "pets". From then on, the moment you get an announcement that says "(SomePetName), Cat (Tame) has given birth to kitten(s)", quickly assign all new kittens to the cage. If they stay in the cage, they cannot mind control your dwarves. If you manage to assign the cats quick enough and even if they manage to adopt someone prior to be put in the cage, they still will be put in it.

Part 3: Getting rid of the unwanted cats[edit]

The options are as follows:

This solution requires micromanagement every 10 years, but solves it for all time!

Once every 10 years or so, breed another batch. Cage kittens as they come out.

This is better done as an all-male than an all-female population, in case a single wrong-sex cat strays from the plan - only one cat pregnant then in generation 1, instead of potentially most of them. This means you keep all aspects of cats, except the breeding is confined to once per 10 years! You could theoretically put all pets in walled-in rooms. No pet deaths, no tantrums, no miasma!

P.S.: if you manage to put all the female cats in a walled-in room, remember that kittens will appear only there - a good spot for a butcher shop and some kind of item drop chutes for ready food and junk disposal. Cats keep your butcher shop free of vermin, too!

P.P.S.: Every time you use a cage on a cat the blood god is deprived from killing seven generations of kittens; so for the love of Armok, remember to sacrifice him some goblins in extra creative ways to compensate! Such as having a pit with all the female cats in the bottom attacking them...

Thanks to the Scamps Conventions of 0.28.181.40d and 0.31.03, the number of Thermonuclear Catsplosions has been drastically reduced, for the ignition keys are now by law hidden in a very Fun place after worldgen. They are, therefore, unavailable to prospective modders elf-fondling terrorists to use after then without causing drastic, system-wide instability to their computer networks.

As a warning, here's the only video footage ever recovered from the horrible aftermath of a thermonuclear catsplosion.

Another problem is little adorable furry things running everywhere. Cavies, another name for guinea pigs, are small and give only a skull when butchered. They are grazers and tend to hog the grass from your other grazing animals (while they don't eat much grass individually, a large group can easily rid a small pasture of grass). Their only benefit is that they make decent pets (but have a low pet value). If you refuse to geld them for some reason, separating male and female cavies is a way of preventing excessive breeding, but most other techniques used on cats can be applied to cavies too.

Many domestic animals, such as chickens, ducks and geese, use the nest box to lay eggs. The huge number of eggs they lay means that, if fertilized by a male, they tend to create their own birdsplosion, in which millions of fuzzy ducklings take over your fort. Although this is not as much a concern as the catsplosion, due to not being adopted as pets, there are still FPS concerns. The best known method to prevent a birdsplosion is to run a campaign on the benefits of eggs for your dwarves. Also? Battery farms. One cage is enough. Don't tell PETA EETA. Unlike cats, birds cannot be gelded, which should be kept in mind.

Given that all crocodilians (alligators, cave crocodiles, saltwater crocodiles) have an enormous clutch size, any successful breeding of these will cause a crocsplosion when the eggs hatch. After that, the mother (and eventually your animal trainers) will be surrounded by a veritable swarm of crocodile hatchlings everywhere. Like the birdsplosion, this can't be stopped with gelding, as reptiles are not geldable.

Be extra super careful about having several mother crocodiles breed at the same time, because it will make your FPS suffer horribly.

An uncommon but quite true occurrence, iguanasplosion is much like crocosplosion, but it involves iguanas and giant chameleons. These uncommonly-found creatures lay a strangely immense amount of eggs, and like crocodiles, allowing them to breed will quickly fill the fortress with ungeldable reptiles. Treat it like you would a crocsplosion.