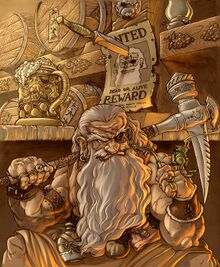 Most towns have criminal organizations, formed by a collection of outcasts. They are led by a boss, may have lieutenants, and may have a representative which is responsible for trade. Criminal organizations can reside in one of the subterranean structures or taverns. Their presence underground can be identified by abnormally-large hoards of items piled on the floor. Since the introduction of intrigue, criminal organizations will be part of a number of plots, often corrupting the town officials to embezzle for them, but also participating in theft and plotting assassinations.

There's two subtypes to bandits. The nomadic kind, and the fort kind.

Nomads may wander the wilderness, live in camps, or inhabit abandoned sites, such as fortressess, forts, caves and the like. Such camps themselves lack any buildings or signs of habitation, except for the occasional campfire and pile of loot, while fort bandits are a little more organized, as evidenced by the fact they build forts. Because the game sees these folk as being the site government of their fort, these bandits will also create positions such as 'head chef' or 'master of beasts'.

Bandits very often have their values or ethics clash with members of civilized society. This means that if your adventurer is part of civilized society, they will be automatically attacked by bandits. You can avoid this by either creating an outside adventurer, who has no ties to the existing entities, or by assuming a compatible identity. If the bandits don't automatically try to murder your character, and your reputation is formidable enough, you can even ask to join them, and ask for quests.

In 42.01 onward, killing bandits in Adventure mode will give you a reputation as "protector of the weak".v0.42.01 Unlike criminal organizations, bandits are considered murderous scum, and thus most folk appreciate you getting rid of them.

Petty criminals will not migrate to your fortress in this version. Immigrants identified as criminals are actually agents (spies) from your own civilization who retained their assumed identities due to Bug 10490. Fixed in 0.47.03.