Divine fabrics are special, procedurally generated fabrics that can be found in vaults. Divine fabrics are used as material for items and clothing used by angels, who ruthlessly protect the vault's priceless treasures. Unlike divine metals, divine fabrics cannot be modified into other items, nor are they appreciably better than their mundane counterparts.

As a quirk, human and elven caravans may bring instruments and instrument parts made out of divine fabric for trade.Bug:9275

Divine fabrics appear to have identical material properties to standard silk cloth except a lack of ignition point. Although they cannot catch fire, they still suffer damage from high temperatures and are not fire-safe. The only differences between types of divine fabric are their name and their color[Verify], both decided by a selected sphere of the deity involved in their creation. 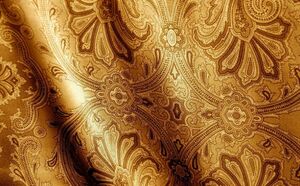 Its texture can cure depression. Its color can remove pain. Its sheen can spawn happiness.