Eggs are laid by creatures with the [LAYS_EGGS] token, or grown by feather trees. This includes ordinary fowl and reptiles, and also some more exotic creatures such as giant eagles, dragons, kobolds, and many others. Eggs can be used by dwarves as food, or they can be hatched. Eggs can only be eaten raw if at least one of their component materials (yolk, white, or shell) is edible raw; otherwise, they have to be cooked into prepared meals first.

Egg-laying animals will claim an empty nest box if one is available.

Males can also be modded to lay eggs, although these may not hatch.Needs clarification 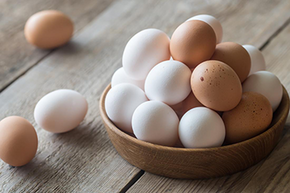 Hatching eggs requires that the dwarves are prevented from removing the eggs (and mother) from the nest box until they have a chance to hatch. This can be done by placing the nest box behind a locked door or by forbidding the eggs in the nest box. Forbidding eggs on the kitchen menu will not prevent dwarves from removing them from the nest box — it will only prevent them from being cooked. Similarly, modifying all stockpiles to disallow eggs will prevent hauling jobs, however the eggs remain available for cooking and eating. It is sometimes possible to remove the mother briefly or near the end of gestation, and have the eggs still hatch (shown with both sentients and livestock). However, for elk bird feeding it is recommended to use chains and animal caretakers instead.

Eggs may be fertilized when laid, or they may not be. In order for eggs to be fertilized, a male of the species must be present (though this does not always guarantee fertilization). Unlike in previous versions of Dwarf Fortress, the male must have spent time with the female to fertilize their seed pouch (the male need not be alive at the time of egglaying, however). One fertilization provides seed for two egglayings, but in practice the first tends to bring the population over the pet cap. Depending on the animal, fertilization chances seem to differ.[Verify] If the creature is part of an actual civilization, then the egg-laying female must also be married in order for her eggs to be fertilized, and she must also have spent time with her husband. (In short, egg fertilization has the same conditions as normal impregnation in the game.)

All fertilized eggs left undisturbed in a nest box hatch after exactly 3 months, unlike in real life.

Fortresses can set up egg production as a source of food. This requires at least one adult, tame, female egg-laying animal, a built and unclaimed nest box, food hauling, and cooking.

It appears from tests that the material an egg is made out of is actually the shell; this includes meals made from the eggs.