Difference between revisions of "DF2014:Temple" 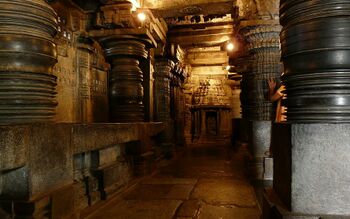 A temple is a structure devoted to an object of worship, which typically is any sphere-aligned being such as a deity, megabeast, or titan.

In fortress mode, temples are locations (l) that can be created from meeting areas (i - m). Temples can be dedicated either to any deity worshipped by at least one of your dwarves (not necessarily from the world's dwarven pantheon), or to "no particular deity", making it a place for anyone to meditate or to worship whomever they want. However, some dwarves* seem to need specific rather than generic temples to avoid unhappy thoughts.

(* If you read the thoughts of certain dwarves, you can note that some have been "unable to pray to (x deity)". If you designate a temple to that specific deity, they will then go pray or meditate with purple text and satisfy their religious needs. This mechanic needs more research.)

Temples require instruments for their music and, thus, need containers to store them. Temples also require a certain amount of empty floor space (called dance floor), same as taverns. Performers can also be assigned to temples to perform sacred dances.

Being able to commune with their deity or meditate gives a serious enraptured stress decrease to the dwarves. Not having a designated place to pray, on the other hand, makes them sad or distracted. Thus, making a temple early on might be a good investment for your fortress, even more so if you're going through difficult times. Simply designating any meeting area as a place to pray is enough to initially satisfy most of your dwarves, you do not need to provide instruments or containers for your dwarves to pray.

Visitors won't visit fortresses specifically to hang out in temples, even if they're set to "All visitors welcome". However, they may pass by the temple and socialize with the dwarves there if they came to visit a tavern or library.

As in adventure mode, creatures that topple a statue (or anything else that's been built) in a temple will be cursed as a vampire or werebeast [1][2].

World-generated temples are visitable in adventurer mode. They are located in human towns and goblin fortresses, and the object of worship will be consistent with the sphere or spheres the civilization is aligned to. Priests can be found in temples, and will allow you to join the local sect of their religion with the conversation topic 'Service'. In the current version, it is not possible to join a temple.

On first joining a sect dedicated to a particular object of worship, that entity will be added to the character's record. An adventurer can then converse (k) anywhere with any deific object of worship. Though the deity's only response is silence, repeated conversations can change the deity's 'object of worship' status from 'dubious' to 'casual', 'object', 'devoted' and 'ardent'. It's unknown whether conversing with other objects of worship can increase their worship status; megabeasts tend to be uniformly hostile, though titans may be flagged 'benign'Verify.

Temples can have basements, sometimes extensive catacombs which may be crawling with enemies. These range from the typical kobolds and goblins, to the occasional lurking mummy (with assorted skeletal minions).

You can defile a temple by toppling a statue, which leads to being cursed by a deity with either vampirism or becoming a werebeast. For this, the temple must be actively used (i.e. not an old ruin).

Occasionally during worldgen, a site government may choose to raze an old temple and build a new one in its stead. The ruins of the old temple, as well as any catacombs it's connected to, will still be explorable in adventure mode.

Interestingly, the construction of the new temple will always coincide with the formation of a new religious order to utilize it. The order belonging to the old temple will remain on the site, but will move their offices to the keep. Due to this, leaders of "archaic" orders are often found in the keep.