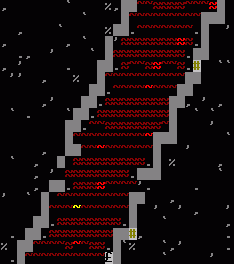 A section of the magma flow.

A miner has discovered a fissure filled with magma.

The magma flow is the third major landmark you will find as you tunnel into the mountain. It can be found by digging east of your entrance, usually one to three screens away. It is surrounded by obsidian 1-2 squares deep on both banks. Several narrow "offshoots" will also be present, staying inside the range of the flow, that is, offshoots would appear on the left side only when the magma flow bends far to the right.

A miner has struck a magma flow! Fire! Death! Flee!

When the chamber containing the magma flow is first breached by a miner, the magma may overflow, which will inevitably kill the miner. At first, it spills at insane speed, other creatures within 20 tiles or so are unlikely to make it away alive. As it expands, the flood slows to a crawling speed by the time it reaches the chasm (yes, it may get that far). After some time the overflow will cool down into solid obsidian which can be mined out again. You will not lose any rocks and ore that were engulfed by the overflow (though you'll end up with some tiles holding the original stone as well as a boulder of obsidian on top of it). Most clothes and equipment will be destroyed, though you may be able to recover the iron pick of a burned miner. Supports are known to survive the magma flood; they will be encased in a square of solid rock, and will still exist once the rock has been mined out from around them.

Miners of higher skill are less prone to triggering a magma flood, although even legendary miners can still trigger them. One strategy to avoid the potential loss of a seasoned miner is to dig a shaft towards the flow until you spot an expanse of obsidian. Turn off Mining in your experienced miner's labor preferences, and bring in an expendable peasant to hew through the obsidian itself.

If you are lucky, you will reach the magma chamber at a spot where there is an empty space (exposed floor) between the miner and the magma. Floods will never be triggered if the magma is reached at such a point. One way to do this is to dig along the obsidian until you reach a bend; often, there are exposed ground tiles at inward corners in the magma flow. If you want extra, easy obsidian (at the cost of a miner), though, the above method may be more practical.

Magma does not experience seasonal overflows (like the cave river) and will never overflow after the first time the magma chamber is breached (even if a miner taps into it at a new, unseen point).

Once the magma flow has been discovered, there is a 25% chance per season of magma monsters emerging to attack your metalworkers regardless of their activity.

Only one type of creature will inhabit any given magma flow.

Fire men and magma men are particularly dangerous as they will seek out and destroy any buildings along the magma flow, including floodgates whose destruction could potentially flood your entire fortress with magma.

Unlike the cave river and chasm, the magma flow can only be crossed by building a bridge made out of steel (or adamantine).