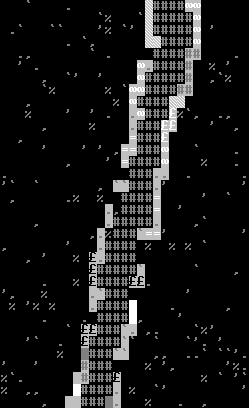 A section of the chasm.

A miner has found a large chasm cleft through the mountain.

The chasm is the second major landmark encountered within the mountain (the first being the cave river). Like the river, you must build a bridge over it to get past it. This obstacle is between 3 and 5 spaces wide, and angles between 148 to 200 spaces from the cliff face. The chasm tends to make sharper turns than the river, and its offshoots are always straight and between 1 and 2 spaces wide.

The chasm is home to several aggressive creatures – primarily ratmen, batmen, and antmen. These monsters usually mount assaults of 5 to 20 or more creatures at a time. If you pour enough magma (water will not work) into the chasm, it will eventually get a red line running down its center, meaning all the creatures have been killed.

The chasm can be used as an unlimited refuse dump. From the orders menu, select refuse to specify which types of refuse should be chasmed. Chasming refuse is hazardous, however, as it incites attacks from the chasm-dwellers. If you then chasm the carnage of the battle, more attacks will occur, which can lead to almost constant assaults.

If you wish to expediently clear the refuse left over from such battles without chasming it, it can be a good idea to construct a large, enclosed refuse stockpile right near the chasm. Building a craftsdwarf's workshop near this stockpile can allow you to turn out thousands of bone bolts or crafts and keep the stockpile from completely filling up.

Once you have a bookkeeper, you can select specific items to be chasmed (not just refuse) from the stocks menu.

Once the chasm has been discovered, there is a 25% chance per season of monsters emerging to attack your dwarves regardless of their activity. Chasming refuse or dumping water/magma into the chasm will trigger up to 3 additional attacks per season. If you have built any wells beyond 130 tiles of the cliff face, certain monsters have a chance to emerge from them instead of from the chasm itself (1% chance per valid well, minimum 10% and maximum 50%); wells closer to the surface will be used by cave river creatures instead.

The monsters from the depths are:

Up to 6 of the above creatures can be found in any given chasm. Creatures marked with a "*" are capable of emerging from wells. After the first 6 chasm attacks, all further attacks will consist solely of creatures with the [RIVERATTACK_MOUNTS] token (i.e. Ratmen and Batmen) - if no such creatures live in your chasm, then you will continue to be attacked by all of the different creatures living in it.

Attacks from trolls are very rare, but can be dangerous. Trolls are strong and are capable of destroying buildings (including doors and floodgates). Gremlins can throw levers, which can lead to all sorts of havoc, so hide your levers behind a door and a trap or two. But be warned, Gremlins themselves do not set off traps.

If creatures from the chasm are locked in a room or otherwise prevented from fleeing back to the chasm, they will instantly go insane.

Dust off and nuke 'em from orbit[edit]

It's the only way to be sure.

Of course, Dwarves haven't quite figured out the art of enriching uranium--or, for that matter, shaping explosives--so we'll have to come up with alternative method of making a parking lot out of the chasm.

Fortunately, magma, being as utterly destructive as it is, makes for a GREAT surrogate thermonuclear weapon, as alluded to in the introductory paragraph of this article. What you do is more or less what you do with your farm, with some small differences. The steps are more or less as follows:

The magma should flow from the river to the other floodgate, and expand into your entrance area, deluging the chasm in magma. Should your stupid novice miner install a floodgate while he's on the *wrong* side of it, you can either opt to leave him there, allowing the magma to instakill and save him from another death in the future (likely to be far worse than being covered with liquid rock) or you could have him dig back to your main tunnel, and block off the magma with a *rock* door, as it will be sufficient to halt the flood of molten death.

For a while, this will increase attacks from the chasm. Eventually, though, a red line will appear up and down the middle of the chasm. Congratulations, you've made a parking lot out of the thing.

To avoid all retaliatory attacks while you nuke the chasm, you can seal it off by digging a channel which covers every exposed portion on the west side of the chasm. Build an aqueduct to bring magma across the chasm and pipe it into this channel. (You can also build a floodgate pointed at your existing bridge(s); the flow will cross the bridge, but be stopped by the channels.)

Most chasm-dwellers cannot cross a magma-filled channel, and will die without ever being seen. However, the occasional troll might be able to get across it, so line the channel with some traps just to be extra safe.

To nuke or not to nuke[edit]

Nuking the chasm will clear it of all life forms, including any potentially valuable purring maggots. However, ratman raids are one of the game's best source of bones, and bone bolts are indispensible for training marksdwarves. Additionally, you will eliminate the possibility of capturing a giant cave spider and harvesting its incredibly valuable silk. If you take the precautions listed below, you can render the chasm quite harmless, without needing to destroy it altogether.

The greatest danger from chasm attacks is the risk of falling into the chasm. Totally healthy dwarves, even elite soldiers, can be shoved (or simply dodge) off the edge during combat with depressing ease. The greatest defense against this is to erect several bridges covering the chasm above and below your main "crossing" bridge(s). This does not require a tremendous amount of material, as the chasm itself is usually quite narrow (3-5 squares in width). If you're a really competent bridge builder, make drawbridges that lift to form walls north and south of your main bridge.

The chasm's monsters are numerous but weak, and can usually be killed by a single stone-fall trap. A phalanx of traps 2-4 squares deep on either side of your bridges can kill just about anything that emerges from the chasm. These might not save an unlucky dwarf stranded in the center of a bridge during an ambush, although if he or she can survive long enough to get across the bridge, the traps will kill all pursuers.

Weapon traps require more resources to build than stone-fall traps, although they do not need to be reloaded once triggered (just cleaned). They are also much more effective against magma creatures that may wander as far into your fortress as the chasm.

Restraining a few war dogs beside your bridges will further bolster their safety. A single dog can usually kill several chasm creatures, and take the heat off any unfortunate dwarves that may be on the bridges during an ambush. Even better, a war dog that attacks a batman while it is over the chasm will usually cause the batman to plummet to his doom.

Building a barracks right next to the chasm just off your main corridor will make it likely that at least a few of your soldiers will be in its vicinity at all times. Off-duty soldiers spar and practice on archery targets in the barracks quite often, and others will sleep there. If you place the barracks on the opposite side of your main dining room, your soldiers will cross the chasm bridges often en route to getting drink or food.

It may also be useful to mine a narrow corridor leading from the barracks directly to the chasm. Attackers from the chasm will often attack on multiple fronts (if there are any available). Connecting your barracks directly to the chasm will often cause the attackers to split their forces between the bridges and your barracks, where there are likely to be soldiers waiting in ambush.

Since monsters will often appear at multiple points along the chasm when given the chance, you can create short trap-lined accessways from your main corridor to the chasm. These should not connect to any bridges so that your dwarves will not use them, but they will draw attackers away from your bridges into deadly passageways. You can also trap the corridor connected to your barracks, if you have built one.

Engraving fortifications which face your bridges and stationing soldiers in these positions can provide an additional layer of defense. Your fortified position can be the barracks itself, which will spare you the need to constantly assign and relieve soldiers -- at least a few off-duty marksdwarves are likely to be in your barracks at any given time, especially if you do not group them into squads.

As a last line of defense, you can enclose the areas leading to your bridges with doors. These can be locked instantly, at will, to keep attackers from penetrating further into your fortress. You can then direct your soldiers to head for the chasm, and reopen the doors when they are in position. It is also recommended you put doors on any side accessways in case the attackers get past the traps. These doors should normally remain unlocked so that the attackers will be lured into the passageways.

If the corridor leading to the chasm is quite wide, you can still fully span it with doors by temporarily locking the door you are building off of, then unlocking it after the new door is built. Another way to build lines of doors works by placing statues, then attaching doors to them. You can either place the statues in line with the doors (door-door-statue-door-door-statue, etc.), or place them behind the doors, then remove them once the doors are built -- allowing you to span a passageway of any width with an uninterrupted line of doors.