The ore of adamantine is absurdly valuable, and can be processed into the most valuable material in the game, both in monetary worth and utility. Its discovery is both a boon and a bane; it has a massive value even unrefined, and gives a huge bonus to armor and weapons that are made from it when processed. Its high melting point means you can easily use it to build magma-safe mechanisms and floodgates, but this is not recommended due to its scarcity and value in other items.

Raw adamantine has a Material Multiplier of x250. For a comparison to other mined materials, generic stone has a MM of x1, obsidian x3, native silver x 10, and native gold x30. Processed adamantine "metal" has a multiplier of x300, the highest in the game of any material.

Adamantine is so valuable, both in price and usefulness, that a special message pops up when your miners discover the first vein of it. 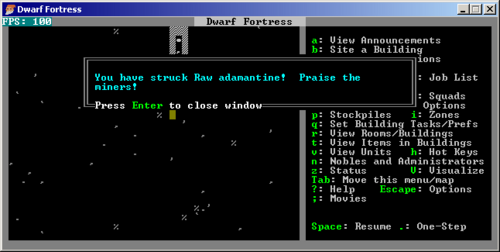 To start in a location which has adamantine you must start on a mountain tile (⌂,⌂,▲,▲,▲,▲,^,^,^) or volcano tile (^) in the Region map. The adamantine will be located somewhere within the Local map of that region. It is more likely to be found on a Local map square which also shows as mountain. The adamantine will occupy only one Local square, though the fun stuff may extend beyond it.

Deposits are not visible on the Region/World maps or the Local maps by default, but can be turned visible by setting SHOW_EMBARK_OTHER to ALWAYS in init.txt, in which case they appear as £ on the local embark map.

Raw adamantine veins are unique in several ways. First, they are usually only 1 tile wide, compared with the 3-5 wide veins of other ores or stones. More curiously, they tend to span z-levels, a trait unique among any stone. If your miners find a short section of raw adamantine only 2 or 3 tiles long, dig up or down a z-level and you'll probably find another short section, and so on. Lastly, they tend to be spidery in shape, extending out from a central point. Digging too far into this area can unlock a certain Spoiler and cause way too much fun for an unprepared fortress. To view examples of this phenomenon, check out the DFMA Point of Interest and a movie recording the layout of a vein.

The main difference is that, unlike other veins of ore, raw adamantine regularly crosses z-levels. If you find a short section, mine up and down, and you should find more. The veins are also generally narrower and more "spidery" and overall provide far less ore than normal.

Unlike other ores, you always get a piece of raw adamantine when you mine it out, no matter how unskilled the miner may be.

One serious downside to mining veins of raw adamantine is that digging too deeply will eventually lead to a certain spoiler, triggering dangerously large amounts of fun which can wipe out even a mature, heavily defended fortress.

Discovery of raw adamantine will also bring the attention of the King (or Queen), who will immigrate to your fortress once news of your discovery reaches him. If you have not otherwise met the criteria for attracting the King, he will arrive "disguised as a peasant." If adamantine is found too early, this can be troublesome for a young fortress that is not properly equipped to satisfy high royal room value requirements and mandates, potentially leading to the monarch throwing tantrums and even eventually going insane.