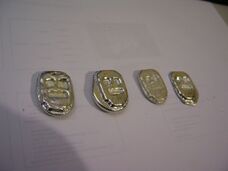 Coins were intended for use with the dwarven economy, until it was removed - in previous versions, copper, silver, and gold coins had monetary value in addition to their intrinsic value, and dwarves would keep personal stacks of coins as part of their personal accounts. Coins of other metals were widely known as "collector's coins." The CURRENCY entity token, which defines the value of coins, does still exist, but is largely unused. Because of this, coins have no economic use in Fortress mode aside from trading.

It is possible - although highly inadvisable in the current version - to construct danger rooms which train dwarves' armor user skills by flinging coins at them.

Coins are commonly found in Adventure mode. Virtually any intelligent being (dwarf, human etc.) you find can have coins in their inventory - provided they have a suitable container on their person, typically a small pouch. Coins from dwarven civilizations are named after the civ's name and the year they were minted as described above - other races name their coins after their civ's name and the name of the reigning ruler. Each civilization maintains its own currency, and coins minted by one civilization will not retain their value if you travel to a town belonging to a different civilization. For this reason, it can be more practical to exchange excess coinage for other small and valuable (barter) objects like gems. Coins are also useful for throwing at enemies.