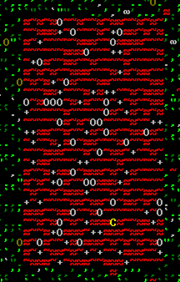 Not to be confused with small religious locations at civilized sites.

Shrines (Å) are a type of site, functioning identically to a lair. They consist of cubic open spaces decorated with pillars, and some smoothed floors. Bronze colossuses, titans, and sometimes also demons make their homes at shrines, and will aggressively defend their territory when approached. Shrines will often be littered with the corpses of past adventurers who tried to fight their inhabitants but failed.