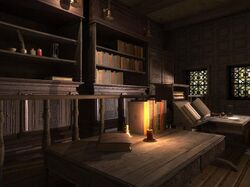 Libraries are locations. At a library, scholars can write books (scrolls, codices, and quires) and scribes can create copies. Any dwarves in your fortress will go to libraries to read books or idle around, giving them happy thoughts.

If your library permits visitors, scholars from civilizations around the world will come to your fort to study, often bringing books of their own. These scholars will engage in various topics with your scholars and each other, and will sometimes write their own books while visiting (using your supplies of writing materials in the process). These books effectively become property of your fortress, as the author usually doesn't take their books away upon leaving. Visiting scholars may petition to become a permanent part of your fortress for the purpose of studying. The rate at which they visit your library and apply for residency might be related to the number of books in your library.

Even with visitors, it takes a long, long time for your scholars to generate much knowledge or write many books in your fort. You can speed up this process by taking books from other libraries, with missions or with adventurers. Legends mode can show you where the libraries are in your world.

It was discovered that by putting an unlinked lever in the back of a library, assigning only the scholars and scribes to use it, then assigning them to pull the lever, with high priority on repeat... due to the vagaries of dwarven psychology, they will find themselves unable to resist reading, writing, or pondering something. This is a good way to increase the productivity of your fortresses' best and brightest.

In vanilla DF, it's rather difficult to get information about the books you own: who wrote them, how many copies you own, what topics they cover, etc. Fortunately, there's a DFHack script that makes all that very clear.

The study area of a human library

An upper floor of a human library, dedicated to storing books

In the rest of the world, libraries are generated structures that can be found in human towns and dwarven fortresses. Like the libraries in fortress mode, they will be frequented by scholars who spend their days discussing scholarly topics. The number of books and scholars in a given generated library depends on the history of the site. A library found in a town with a poor history may be almost empty of books and scholars alike.

The ground floor in a generated library is typically used as a study area, and furnished with chairs, tables and a container with usable writing materials. A ramp-staircase connects the ground floor to higher floors as well as a basement. Basements and higher floors are typically used to store the books, and contain several bookcases. Libraries found in fortresses only have two floors, while those found in towns can span many stories high.

Libraries have an effect in world gen based on the original and copied books that are there. Every year, each library gets five turns to pick a book. If the book has a poetic/music/dance form, it has a chance to make that form well-known in the entire parent civ, as a form of cultural diffusion. If the book promotes a value at a certain level, it makes a roll against the author's skill roll when they wrote the book. The local site civ can have their values shifted by 1-2 points (it takes 10 or more to change the visible text for the value), and the parent civ can also be shifted a point, and all sites under the parent civ have a chance to be shifted a point as well.