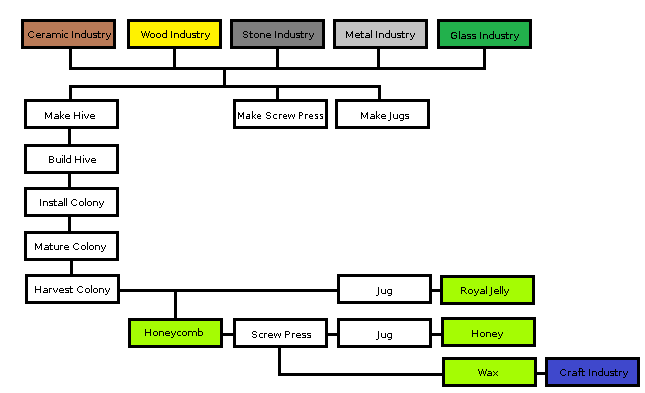 Wild colonies of honey bees · must be present on the map. Since live vermin cannot be bought during embark, wild bees are necessary to start beekeeping. Colonies of honey bees can appear in any non-freezing land biome, which excludes mountains, glaciers, and tundras. While they are common in places they appear ([FREQUENCY:100]), bees are not [UBIQUITOUS], thus are not guaranteed to appear in every region.

Honey bees are one of the [VERMIN_SOIL_COLONY] creatures, which includes bumblebees, ants, and termites. Colonies of honey bees appear randomly on the surface ground as ○. Maps have a hard limit to how many wild colonies can appear simultaneously. If new colonies stop appearing, it means this limit has been reached. Therefore, honey bee colonies might be unable to spawn because the "space" is occupied by other vermin colonies. Building dirt roads over existing colonies frees up space for new ones to generate.

If a colony cannot be found after searching, set up a single hive and leave it for about a year as a last-ditch effort. Beekeepers will immediately be able to find an accessible honey bee colony that may have gone unnoticed or spawned inconspicuously. Occasionally check the hive for live bees by viewing the building with t from the menu.

Hives ▬ are a tool. They can be made in a variety of hard materials from their respective workshops and labors. Beekeepers themselves do not make them. Hives are stored in finished goods stockpiles. They can be built by opening the building menu and either selecting Hive or pressing Alt + h. They can be built on any hard surface, both indoors and outdoors. Citizens with beekeeping enabled are needed to build them.

Tile attributes affect honey production. In order for hives to produce, they must be built adjacent to (or on) an above ground tile. Subterranean hives can still store colonies that can be used later for splitting, but they cannot produce anything. Hives are marked as having either Outdoor or No outdoor access; this is referring to the above ground and subterranean attributes, not the outside and inside attributes. Hives can produce normally in both outside and inside tiles. So long as hives are placed above ground, they can be completely enclosed with constructions from outside while still creating products, allowing beekeepers to work safely at all times.

Managing hives is fairly automated. Beekeepers will perform most of the necessary jobs on their own when available. There are two options in the building settings that can be toggled to control beekeepers from installing colonies or from gathering products in a hive. Hives are set by default to allow colony installation and product gathering.

There is a soft limit of 40 colonies. Empty hives, wild colonies, and hauled colonies do not count to this limit. When the number of colonies on the map reach over 41, honeycomb and royal jelly no longer have a 100% possibility of spawning six months after installation. If the colony does not produce a honeycomb or royal jelly, then it has a chance to produce again every six months. The likelihood of spawning affects products individually, so it is possible that a honeycomb appears while royal jelly does not, and vice versa. The soft limit does not affect colonies that were installed before the limit was passed. Hives that contain colonies will have the following warning in the building settings when the soft limit is exceeded:

The limits do not affect the spawning of wild colonies, nor do they alter the amount of time needed for colonies to become ready to split.

Built hives can be removed using the building menu (q + x). A beekeeper is required to remove the hive. After the building is removed, the item is carried back to a finished goods stockpile by an item hauler. Hives can also be destroyed by building destroyers and cave-ins. It is unknown if evil weather and temperature have any destructive effect on the building or colony.Verify

Deconstructing a hive releases the colony inside (it cannot be retrieved), as well as dropping any honeycomb, royal jelly, or jug left inside. Fallen honeycombs and jugs can be hauled back, but spilled royal honey cannot be hauled.

Six months after installing a colony, a hive produces one honeycomb ∞ and one royal jelly ≈. Products have a 100% chance of spawning, unless the colony count exceeded the limit. Only one honeycomb and royal jelly will spawn at a time, and no further products will appear until they are gathered from the hive. The colony size does not affect the output speed. In addition, the surroundings, plants, weather, and the seasons do not affect production.

Royal jelly is a liquid food. It is used as an ingredient in prepared meals, but it can only be cooked if another solid food item is included in the meal.

Honeycombs are classified as tools, and are stored with other finished goods. As an intermediate product, honeycombs do not have any applications on their own, but when pressed at a screw press, it produces two items: honey ≈ and pressed wax (or wax cake) ≈, both of which are stored in food stockpiles. To press a honeycomb, add a new task in a screw press and select "Press honey from honeycomb" (h), or search and select "Press honey from honeycomb" in the manager screen. An empty jug is needed for the job to store the honey.

Honey, like royal jelly, is a liquid food that can be cooked into a meal. Additionally, honey can be brought to a still and brewed into mead, the only obtainable non-plant-based alcoholic drink. Wax can be processed into various crafts by a wax worker. Wax crafts have a material value of one.