A small woolly insect that lives in hive colonies. It has an annoying sting which it rarely uses.

Bumblebees are a type of vermin found in any area that isn't freezing. They can sting a nearby dwarf without killing it, causing slight pain but no negative thought for the dwarf. They are not killed by cats.

Bumblebees spawn from "colonies", and are one of several creatures to do so (the only notable one being the honey bee). However, unlike the former, bumblebees can't be used for beekeeping, this being an intentional decision by Toady One. Bumblebee mead appears in the food stockpile along with standard honeybee mead, though it is not possible to brew it. 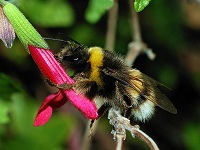 Admired for its woolly appearance.

Nectar collected by bumblebees was traditionally collected by children in Scandinavian countries and termed "bumblebee honey" or "bumblebee mead"; it was used both as a food and for medicinal purposes. However, because they form annual rather than perennial colonies, they do not store the large amounts of honey that honey bees do.

Some bumblebees have been seen traveling with a giant rad and blue robot, and often transform into muscle cars.