Royal jelly is a product of the beekeeping industry collected from an artificial bee hive. Royal jelly is stored in jugs, and can only be used as a liquid ingredient in prepared meals. Due to a bug, dwarves may store royal jelly jugs as finished goods; combined with a cook's aversion to liquid ingredients, it is very rare to see royal jelly cooked at all. That isn't necessarily a bad thing, though, since royal jelly is only available in single-unit stacks and has the same base value as most other foods.

The contents of a hive with a colony of honey bees that is toggled to "gather any products" will be harvested as part of the beekeeping industry. In order to collect the royal jelly, you must have a dwarf with the beekeeping labor active and empty jugs. A honeycomb will also be produced.

Royal jelly and honey are the edible products of bees. In real life, it is used as a nutritional substance for larvae. 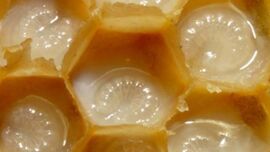