Pixies are a very common type of fanciful above-ground vermin that live in good areas. They drift in the air in faintly glowing, colorful groups, dancing intricately. Repetitive music and recreational pixie dust use are likely involved. They, alongside fairies, are the only intelligent vermin in the game, though they can't be interacted with on the basis of being vermin. When encountered in adventure mode, they will glow in the dark. While they possess a pet value of 10, they can't be captured with animal traps.

Despite their description, pixies do not actually have wings (though they can still fly without them). A comment on their raws implies Toady plans to eventually give them lacy wings.

Some dwarves like pixies for their shifting colors and their intricate aerial dances. 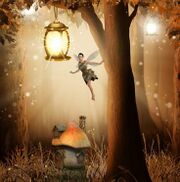 Much smaller than pictured.
Retrieved from "https://dwarffortresswiki.org/index.php?title=DF2014:Pixie&oldid=264393"
Categories:
Hidden categories: