A tiny reptile, running on two legs. It has a horn on the end of its nose.

Two-legged rhino lizards are a (fictional) type of vermin unique to savage areas. Aside from the savage requirement, however, they are ubiquitous, from scorching deserts to glaciers. They are essentially a lizard larger than a crow with only two legs. They are VERMIN_EATER with a PENETRATEPOWER of 2, which means they're better at gnawing their way through your barrels than most vermin.

Unlike lizards (i.e., the common lizard, zootoca vivipara, as stated in the raws), two-legged rhino lizards are not hateable. They have twice the pet value of lizards.

Some dwarves like two-legged rhino lizards for their horn. 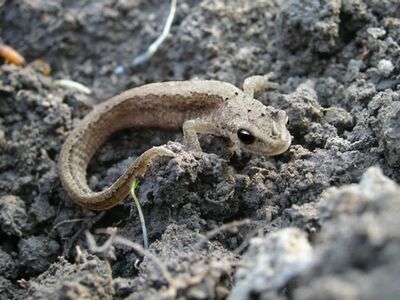 Admired for its horn.
Retrieved from "https://dwarffortresswiki.org/index.php?title=DF2014:Two-legged_rhino_lizard&oldid=256575"
Categories:
Hidden categories: